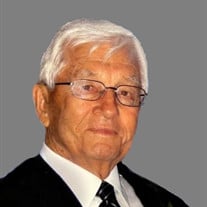 CENTRALIA — William Bundy “Bill” Wham, of Centralia, Illinois and Cincinnati, Ohio, died on Monday, January 10, 2022 in Cincinnati, Ohio, just a few weeks shy of his 100th birthday. He was born in his parents’ house on Second Street in Centralia on February 26, 1922 to Charles and Sarah Pauline (Bundy) Wham. He married Mary Ann (Gullett) Wham on August 25, 1945 in Decatur, Illinois, and she predeceased him in 1974. He married Joan (Behrens) Wham on July 24, 1976 in Centralia, and she survives him. In addition to his loving wife, Joan, Bill is survived by: his children, Ann Wham Gerwin (James), William Douglas Wham (Susan Aaronson), and Jeanne Wham Hardt (John); nine grandchildren, Abigail Gerwin Rhoades (Gregory), Maxwell Wham Gerwin (Renée), Hilary Gerwin Raidt (Michael), Ethan Aaron Wham, Allegra Ann Wham, Andrew Hardt, Madeleine Hardt, William Hardt, and Griffin Hardt; and four great grandchildren. He is also survived by his brother-in-law, Dr. Hilbert Ziskin, of Amsterdam, New York, his four nieces, Sarah Wham Cary, Jennifer Wham Price, Mary Beth Ziskin, and Nancy Ziskin Deneen, his five nephews, Charles Wham Ziskin, Benjamin Wham Ziskin, Joseph Wham Ziskin, James Wham Ziskin, and David Wham Ziskin, as well as many cousins and great-nieces and great-nephews. He was preceded in death by his parents and his first wife, Mary Ann, his brother, James B. Wham of Centralia, his sister, Dr. Elizabeth Wham Ziskin of Amsterdam, N.Y., his sisters-in-law, Phyllis Wright Wham and Jeanne Gullett Henking, and his nephew and namesake, William Wham Ziskin. He attended Central School and Centralia Township High School, Class of 1939. He was a Centralia Orphans basketball, football, track, and cross-country athlete and had the privilege of being coached by Arthur L. Trout, for whom he had the highest regard. He graduated from the University of Illinois in Champaign in 1943, where he was a member of Sigma Chi fraternity, studying commerce and law. His education at the University of Illinois College of Law was interrupted by service in the U. S. Navy during World War II. He attended Officer Candidate School in Chicago where he was commissioned as an ensign and later attained the rank of Lt. (jg). He served in New Guinea and elsewhere in the South Pacific as commander of an LCT in the Seventh Fleet under the command of General Douglas MacArthur. After the end of the war, he resumed his legal studies, and graduated as a member of the Order of the Coif. He was admitted to the Illinois Bar in 1947 and commenced the practice of law at the law firm started by his grandfather, William F. Bundy, and continued by his father, Charles Wham. He practiced law at Wham & Wham for more than 40 years in partnership with members of his family. Bill served the Centralia community in many ways through the years, including as a member of the Centralia High School Board of Education and the Boards of the Centralia Foundation, the Old National Bank, and the Human Rights Commission. He was a member of the Centralia Industrial Commission, the American Legion, the Veterans of Foreign Wars, the American Bar Association, Marion County Bar Association, and a lifetime member of Rotary Club. Bill was an avid tennis player. In the early 1960s, he renewed his interest in running and continued to run well into his 80s. He was a friend, advisor, and mentor to many. Services will be held at 2:00 p.m. on Saturday, January 22, 2022 at the First United Presbyterian Church, 300 W. Broadway, in Centralia. Interment will follow at Elmwood Cemetery. Friends are invited to visit with the family at the First United Presbyterian Church from 12:00 p.m. until the time of the service at 2:00 p.m. The family asks those attending to please wear a mask and to be mindful of social distancing. Memorials may be made to the Centralia Foundation and will be accepted by the Sutherland-Garnier Funeral Home at 235 North Sycamore Street Centralia, illinois 62801, who is honored to be of service to the Wham Family. Online condolences may be made to the family by visiting www.sutherlandfuneralhome.com and the Sutherland-Garnier Funeral Home Facebook Page.

The family of William "Bill" Wham created this Life Tributes page to make it easy to share your memories.

Send flowers to the Wham family.