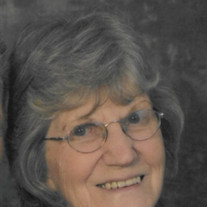 Vivian Ann Hutchins, 84, of Centralia, passed away Wednesday, January 20, 2021 at her daughter’s home in Centralia surrounded by her family. Vivian was born February 1, 1936 in Benton, IL, the daughter of Lyle “Lester” Huffstutler and Grace May (Wilkerson) Huffstutler. She married Kenneth J. Sisk and he preceded in her death on April 12, 1976. She then married John M. “Jack” Hutchins on September 19, 1987 and he preceded her in death on February 20, 2015. Vivian is survived by her son: Ken D. Sisk and wife Renee of Mt. Vernon; two daughters: Deborah Kelm and husband Mark of Cisne and Tina Altenbaumer and husband Mike of Centralia; eight grandchildren: Terry Cline and wife Dawn of Fairfield, Lisa Moore and husband BJ of Odin, Justin Daugherty of Casey, Stephanie Murphy and husband Tom Jr. of Centralia, Gayla Morrow and husband Jonathan of Cleburne, TX, Kara Palmer and husband Nik of Mt. Vernon, Luke Altenbaumer and wife Nicole of Champaign, and Katey Altenbaumer of Kissimmee, FL; eleven great-grandchildren: Dylan Massie, Michael Cline, Macey Lane, Alexis Cline, Zachary Moore, Gracie Moore, Taylor Middleton and husband Harley, Gavin Murphy, Annabelle Morrow, Lilly Morrow, and Samuel Morrow; one great-great grandchild: Aiden Clark; two sisters: Gerre Arney of Centralia and Carolyn Sue Barmore of Sheridan, IN; and several nieces and nephews. Vivian was preceded in death by her parents Lester and Grace Huffstutler, her husband Kenny Sisk, her second husband Jack Hutchins, and two brothers: Audrey and Ferrell Huffstutler. Vivian worked at Shakeproof and Owens companies in Elgin Illinois and was a Tupperware dealer with her group the Bellringers until moving to Southern Illinois in the mid 70’s. At that time she spent her days as a homemaker and taking on such hobbies as bowling and CB Radio club as well as volunteering at the grade school in Fairfield. She enjoyed camping with her family, especially attending Bluegrass music festivals and following her favorite band The Downstate Ramblers. In her later years at the age of 57, Vivian began line dancing lessons and proceeded to to do so for eighteen years. She enjoyed spending time with her family and baking her favorite goodies for them including Congo bars, Twinkie Cake, fudge, cherry pie and especially White Pie. Vivian was a devoted Christian and loved attending church and partaking in activities as she could. She was expecting a new Great-Grandchild, Baby Palmer in August 2021. Vivian didn’t know a stranger and will be missed by many. Per her wishes, a private family service will be held at a later date for Vivian Hutchins. Burial will follow at Hillcrest Memorial Park in Centralia. In lieu of flowers, memorial donations can be made to Alzheimer’s Association and The Rock of Ages Senior Ministry (please make checks payable to The Rock Church) and will be accepted at the Sutherland-Garnier Funeral Home and Cremation Services at 235 North Sycamore Street Centralia, Illinois 62801, (618)532-3523, who is honored to be of service to Vivian’s Family. Online condolences may be made to the family by visiting www.sutherlandfuneralhome.com and the Sutherland-Garnier Funeral Home Facebook Page.

The family of Vivian Ann Hutchins created this Life Tributes page to make it easy to share your memories.

Send flowers to the Hutchins family.