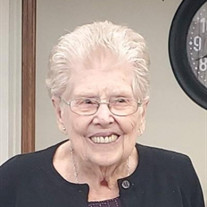 Viva Elaine McLean, 94, of Centralia, Illinois passed away Tuesday, December 8, 2020 at Centralia Fireside Nursing Home. She was born April 2, 1926 in Pinckneyville, the daughter of Elmer Dempsay and Alpha (Reidelberger) Dempsay. Viva married Bruce McLean on June 6, 1947 and he preceded her in death on May 23, 2019. They were married 71 years and were active members of the First United Methodist Church in Centralia from 1963 until 2019. Viva is survived by her two sons, Dennis McLean (Becky) of Centralia, IL and Mike McLean, of Los Angeles, CA; a son-in-law: David Byrd of Fulton, Kentucky; five grandchildren, Heather Byrd Honeycutt of Atlanta GA, Mandy Byrd of Murray, KY, Trista Kozuszek (Brandon) of Irvington, IL, Ashley McLean (John Lenzini) of Centralia, and Sean McLean (Shannon) of Troy, IL, and four great grandchildren Annabelle Lenzini, of Centralia, Braelyn Kozuszek of Irvington, and Everett McLean and Sullivan McLean both of Troy; four brothers: Asa D. Dempsay, Paul O. Dempsay, Ralph C. Dempsay, and Doug Dempsay; several nieces and nephews. She was preceded in death by her parents: Elmer and Alpha Dempsay, husband: Bruce McLean, a daughter: Catherine Jean Byrd, and two brothers: Elmer D. Dempsay and Clyde Dempsay. Viva was a teacher in a one room school house, Looney Elementary, for a time and she was the Office Manager at the Hudelson Baptist Children's Home in Centralia for 15 years. She enjoyed the kinship and friendship of her neighbors. She also enjoyed going camping and was very involved with her grandchildren. A Private Family Graveside Service will be held Saturday, December 12, 2020 at 1:00 PM at the Oakdale Township Cemetery in Oakdale, Illinois. Memorial donations may be made to the First United Methodist Church in Centralia and the Alzheimer's Association and will be accepted at the Sutherland-Garnier Funeral Home and Cremation Services at 235 North Sycamore Street Centralia, Illinois 62801, (618)532-3523, who is honored to be of service to the McLean Family. Online condolences may be made to the family by visiting www.sutherlandfuneralhome.com and the Sutherland-Garnier Funeral Home Facebook Page.

The family of Viva McLean created this Life Tributes page to make it easy to share your memories.

Send flowers to the McLean family.