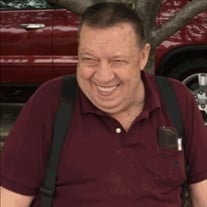 Vernon Harris, 78, of Centralia, passed away Tuesday, December 21, 2021 at SSM Health St. Mary’s Hospital in Centralia. He was born January 13, 1943 in Tennessee, the son of Isaac Harris and Dollie (Meadows) Harris. He married Linda Cavness on January 13, 1973 and she preceded him in death on April 7, 2011. Vernon is survived by his four children: Debbie Overbeck and husband Dennis of Centralia, William Harris of Centralia, Terry Harris and wife Dana of Centralia, and Trish Phillips and husband Bubble Up of Salem; 11 grandchildren: Tyson Phillips and wife Jennifer of Salem, Blake Harris and wife Jessica of Salem, Britney Pennypacker and husband Brian of Salem, Bryce Harris of Salem, Kelsie Young and husband Tommy of Centralia, Malorie Bierman and husband Kyle of Centralia, Katie Overbeck of Centralia, Casie Elliott and husband John of Centralia, Jamie Harris, Hailie Harris and Tanner Harris all of Centralia, 23 great-grandchildren, and 4 great-great-grandchildren; three brothers: Joe Harris, Dale Harris and wife Katie, and Vernie Harris and wife Norma all of Tennessee; a sister: Rita Westerman of Tennessee; several nieces and nephews. He was preceded in death by his parents, wife, three grandsons: Tyler Phillips, Joshua Harris and William Harris, three great-granddaughters: Laynie Harris, McKenzie Harris and Presley Phillips; a daughter-in-law: Crystal Harris; and seven brothers and one sister. Vernon worked at Kas Potato Chip until its closing and he retired from Arrow in Breese. Vernon was a simple man and he enjoyed going hunting, fishing, and attending auctions. He cherished the time he spent with his family. Funeral Services for Vernon Harris will be held Monday, December 27, 2021 at 12:00 PM at the Sutherland-Garnier Funeral Home in Centralia with Pastor Steve Upchurch officiating. Entombment will follow at the Hillcrest Lakeside Mausoleum in Centralia. Visitation will be held Monday from 10:00 AM until the time of service at the funeral home. In lieu of flowers, memorial donations may be made to the Donor’s Choice and will be accepted at the Sutherland-Garnier Funeral Home at 235 North Sycamore Street Centralia, Illinois 62801, (618)532-3523, who is honored to be of service to the Harris Family. Online condolences may be made to the family by visiting www.sutherlandfuneralhome.com and the Sutherland-Garnier Funeral Home Facebook Page.

The family of Vernon Harris created this Life Tributes page to make it easy to share your memories.

Send flowers to the Harris family.