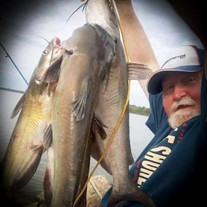 Thomas "Jeff" Harvey, 63, of Centralia, passed away Saturday, October 2, 2021 at Deaconess Gateway Hospital in Newburgh, IN surrounded by his family. Jeff was born August 2, 1958 in Mt. Vernon, IL, the son of Jim Harvey and Maudie Graham. He married Amanda Miller on December 31, 1992 in Fairfield and she survives him in Centralia. In addition to his wife Amanda of 28 years, he is survived by two sons: Anthony Graham and wife Mary, and T.J. Harvey; four daughters: Carissa Pate and husband James, April Higgins and husband Bill, Loretta Graham and wife Dorothy, and Caitlin Harvey all of Centralia; thirteen grandchildren; five great grandchildren; mother Maudie Graham and husband Dillon; step-mother Barbara Harvey; two brothers: James Harvey and Leslie Harvey; two sisters: Rhonda Dewald, and Veronica Terry; nine step-sisters; and two step-brothers; best buds: Joe Graham, Alvie Buchanan, and Scott Braden; and many nieces and nephews. Jeff was preceded in death by his father Jim Harvey; step-father Gene Campbell; grandson Anthony Joe Graham, Jr.; step-sister Vivian Contratto; and one son-in-law Gabriel Valle, Jr. Jeff loved his family, fishing, mushroom hunting, writing poetry, music and his Murray Center family and Rockwell friends. He also served in the U.S. Army. Most of all, he loved the time spent with his family and will be remembered as a loving husband, father, grandfather and friend. A Visitation for Thomas "Jeff" Harvey will be held Saturday, October 9, 2021 from 5:00 p.m. to 7:00 p.m. at the Sutherland-Garnier Funeral Home in Centralia with Military Honors at the Funeral Home. In lieu of flowers, memorial donations may be made to the family and will be accepted by the Sutherland-Garnier Funeral Home at 235 North Sycamore Street in Centralia, Illinois 62801 (618) 532-3523, who is honored to be of service to the Harvey family. Online condolences may be made to the family by visiting www.sutherlandfuneralhome.com or the Funeral Home's Facebook page.

Thomas "Jeff" Harvey, 63, of Centralia, passed away Saturday, October 2, 2021 at Deaconess Gateway Hospital in Newburgh, IN surrounded by his family. Jeff was born August 2, 1958 in Mt. Vernon, IL, the son of Jim Harvey and Maudie Graham. He... View Obituary & Service Information

The family of Thomas "Jeff" Harvey created this Life Tributes page to make it easy to share your memories.

Send flowers to the Harvey family.