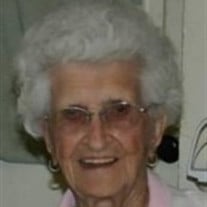 Thelma Phillips Deadmond, 101, of Centralia, passed away Friday, February 12, 2021, at the Cottages at Salem. Thelma, the daughter of Lee and Winnie (Pollard) Shuler was born September 27, 1919, in Odin. She married Herbert Phillips on March 1, 1941, and after 61 years of marriage, he preceded her in death on March 29, 2002. Thelma and Herbert are survived by their three children: Michael (Sandie) Phillips of Salem, Dana (Jonnie) Pruitt of New Baden, and Eddie Phillips of Centralia. In addition to their children, Thelma is survived by eight grandchildren, twenty-one great-grandchildren, a sister-in-law, Carolyn Shuler of Champaign; several nieces, nephews, and countless others who Thelma loved like her own, including many of her babysitting kids and the mother of two of her grandchildren, Carol (Mike) Schwartz of Salem. On May 1, 2006, Thelma married Leon Deadmond-son Vernon (Janna) Deadmond and he survives in Odin. Thelma was preceded in death by her parents, Lee and Winnie Shuler; husband, Herbert Phillips; three brothers: Arvle Shuler, Tiny Shuler, Buddy Shuler; and three sisters: Lena Davis, Lela Helpingstine, Irene Bryant. Funeral Services for Thelma Phillips Deadmond will be held Friday, February 26, 2021, at 1:00 PM at the Sutherland-Garnier Funeral Home in Centralia. Burial will follow at Zion Hill Baptist Church Cemetery in Centralia. A Visitation will be held Friday morning from 11:00 AM until the time of the service at the funeral home. In lieu of flowers, memorial donations may be made to the Zion Hill Baptist Church Cemetery and will be accepted at the Sutherland-Garnier Funeral Home and Cremation Services at 235 North Sycamore Street Centralia, Illinois 62801, (618) 532-3523, who is honored to be of service to the Phillips Deadmond Family. Online condolences may be made to the family by visiting www.sutherlandfuneralhome.com and the Sutherland-Garnier Funeral Home Facebook Page.

Thelma Phillips Deadmond, 101, of Centralia, passed away Friday, February 12, 2021, at the Cottages at Salem. Thelma, the daughter of Lee and Winnie (Pollard) Shuler was born September 27, 1919, in Odin. She married Herbert Phillips on March... View Obituary & Service Information

The family of Thelma Phillips Deadmond created this Life Tributes page to make it easy to share your memories.