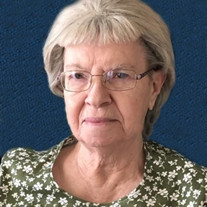 Thelma Arlene Cain, 88, of Salem and formerly of Butler, Pa., passed away on Thursday, May 6, 2021, at the home of her daughter in Salem. She was born December 23, 1932 in Armstrong County, Pennsylvania, the daughter of Percy and Winifred Neely. She married James H. Cain Jr., on November 24, 1956 in Butler and he preceded her in death in 2013. She and her husband moved to Salem more than 20 years ago to be near their daughter. She is survived by her daughter Cynthia Cain of Salem; grandchildren Joshua Cain and wife Mandi of Salem; Michael Cain, Jennifer Nolan and husband Henry and Tiffanie Rodgers, all of Pennsylvania; special cousins Sally Cain and family; several great grandchildren; and several great-great grandchildren; and a son, Mark Cain. In addition to her husband and parents, she was preceded in death by her brothers Jack, Fred and Paul Neely; a great grandson, Skyler Cain; sister-in-law Ann Cain; and cousin, Victor Cain. Thelma began playing the piano at the age of six and played and sang her final song just one week before her passing. Shortly after her high school graduation, she began singing with a trio and performed on the Radio Revival Hour with the Rev. N., K. Powell on WISR in Butler. She was in the choir at North Main Street Church of God in Butler and the featured soloist in special concerts and Cantatas. She was the pianist and musical director for many church's and church services. Thelma and her husband volunteered at local nursing homes, singing duets and Thelma's original music. She cherished her family and shared a special bond with her daughter, Cynthia. Thelma built her life on a strong foundation of faith which she carried into her final days. In accordance with her wishes, a private service was held at Paradise Cemetery in Salem. In lieu of flowers or memorials, Thelma's family asks that we honor her name and her life through an act of kindness to someone in need. The family are being service by the Sutherland - Rankin Funeral Home in Salem, entrusted with the family's care.

Thelma Arlene Cain, 88, of Salem and formerly of Butler, Pa., passed away on Thursday, May 6, 2021, at the home of her daughter in Salem. She was born December 23, 1932 in Armstrong County, Pennsylvania, the daughter of Percy and Winifred... View Obituary & Service Information

The family of Thelma Arlene Cain created this Life Tributes page to make it easy to share your memories.

Send flowers to the Cain family.