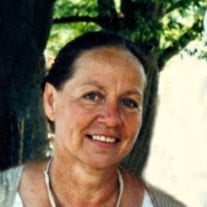 Sue Hulsey, 87, of Kinmundy, Illinois passed away May 28, 2022 at her home in the care of her children. Born October 9, 1934 in Alma, she was the daughter of William P. "Bill" and Ella Mae (Florey) Hester. Graveside funeral services will be held at 1:00 pm on Wednesday at the Alma Cemetery with Jim Clayton officiating. A time of visitation will be from 11:00 am until 12:30 pm on Wednesday in the chapel of Sutherland - Rankin Funeral Home. Memorials may be made to the Ragged Raiders and will be accepted by the Sutherland - Rankin Funeral Home, P.O. Box 97, 310 N. Broadway, Salem, IL 62881 (618) 548-1234, entrusted with the family's care. On line condolences may be left at sutherlandfuneralhome.com. She graduated Kinmundy - Alma High School as Valedictorian. She farmed, was known as a writer, and loved to sing and paint. Her interest in historic reenacting grew into the restoration of an historic local cabin, where she established a yearly program for local school children. She was always an enthusiastic gardener and helped established the Hester Memorial Garden in Alma. Sue joined in marriage with Dale Ford Hulsey, February 4, 1951 in Kinmundy, and he preceded her in death April 4, 2014. Survivors include her children, Kelley Hulsey and wife Tracy, and Tara Hulsey, all of Kinmundy. Also her grandchildren Morgan Miller and husband Zachary of Nashville, TN, Spencer Hulsey of LaCrosse, WI, Carson Hulsey and wife Kierston of Kinmundy and Carter Hulsey of Alma. Also left to mourn her passing is her sister, Becky Jones of Kinmundy and several nieces and nephews. In addition to her husband and parents, she was preceded in death by an infant daughter, Mary Elizabeth Hulsey and her brother Jim Hester, August 9, 2021.

Sue Hulsey, 87, of Kinmundy, Illinois passed away May 28, 2022 at her home in the care of her children. Born October 9, 1934 in Alma, she was the daughter of William P. "Bill" and Ella Mae (Florey) Hester. Graveside funeral services will... View Obituary & Service Information

The family of Sue Hulsey created this Life Tributes page to make it easy to share your memories.

Send flowers to the Hulsey family.