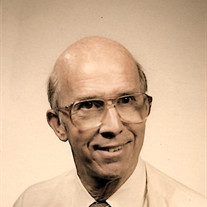 Stewart "Buzz" Scott III, 86, of St. Louis County, MO passed away in his home on June 22, 2016. Buzz was born in St. Louis, MO, September 7, 1929, the son of Stewart Scott II and Marion May (McMackin) Scott. He was a graduate of St. Louis Country Day School, and continued to receive a degree from MIT in Chemistry and a Masters from the University of Missouri, Rolla in Mechanical Engineering. He worked at McDonnell Douglas as a Design Engineer. One of his well-known designs at McDonnell Douglas was an aero-dynamic piece on the back of the cockpit for the FA-18 Hornet. He was devoted to The Boy Scouts of America. He was married to Colette Jeanne (Noirot) Ely on December 26, 1970. A seaman, Buzz loved sailing the sea, and worldwide traveling with his wife, including to their place in Man O War Cay, Bahamas. He also loved his family genealogy with a strong connection and early pioneering efforts within Marion County, IL, most especially Salem. He was extremely proud of his McMackin family relationship, the families Scottish heritage and his membership in the St. Andrews Society in St. Louis, MO. He was survived by wife, Colette (since passed October 1, 2019), his daughter Kimberly Anne (Scott) Whittley and husband Jim; his stepchildren John Marcel Ely, Francine (Ely) Cannon and husband Rob and Michele (Ely) McGaffic, along with 8 grandchildren, several great grandchildren, nieces, nephews and cousins from the Goding and McMackin families. In addition to his wife and parents, he was preceded in death by his sister and brother-in-law, Jean and George Goding. A memorial service will be held at 1:00 pm, Saturday, September 25, 2021 in the chapel of Sutherland - Rankin Funeral Home in Salem with Rev. Denise Burke officiating, with funeral selections provided by bagpiper in full attire, Les Lannom. The family invite you to gather with them at the funeral home from 12:00 o'clock noon until the service hour. Burial of cremains will follow at the East Lawn Cemetery in Salem, near his parents. Military rites will be accorded at the graveside by the Salem American Legion Post #128. The interment will conclude with Lay Me Doone on bagpipes. In lieu of flowers, the family request donations be made to the Leukemia Society and will be accepted by the Sutherland - Rankin Funeral Home, 310 N. Broadway, P.O. Box 97, Salem, Illinois 62881 (618) 548-1234, entrusted with the family's care.

The family of Mr. Stewart "Buzz" Scott, III created this Life Tributes page to make it easy to share your memories.

Send flowers to the Scott family.