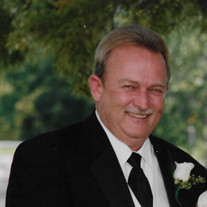 Steven Joe Street, age 67, of Walnut Hill, IL, passed away peacefully in his home, Tuesday morning, July 14, 2020, with family by his side. Steve was born May 16, 1953 in Centralia, IL. He is the son of the late Mary (Skibinski) Street, and Bernard Keith Street. Steve spent most of his life living just down the road from where he grew up in Raccoon Township. Attending Raccoon Grade School and Centralia High School, he would have been the Class of ‘71. He ended his schooling early to start life. Steve started his career as a welder at Centralia Engineering for several years, and then spent the majority of his time as an over-the-road truck driver for several different trucking companies, until finally retiring from being an owner/operator in 2014, after driving for nearly 40 years. Steve was always a thrill seeker, sometimes to the point of injury. He was a man who showed no fear. In his early years, he loved racing cars, and in later years he was racing ATV’s with guys half his age. He always had a need for speed, and a thirst for an adrenaline rush. If you ever rode with him, you probably experienced this, even at your disapproval. He was someone who knew how to have a good time, and always enjoyed sharing that good time with others. Steve was a faithful husband, and a tough, but loving father. He was a friend to many, and will be dearly missed. Steve is preceded in death by his mother, Mary Street, and very close friend Ricky “Tiny” Ponyi. He is survived by his wife of 38 years, Debbie Street; daughter, Kimberly Cohen and husband Mike, of Owasso, OK; daughter, Staci Becker and husband Matt, of Breese, IL; son, Shane Street and wife Ashlee, of Germantown, IL; son, Steven Street, Jr. of Owasso, OK; sister, Debby Woolbright and husband Kevin of Walnut Hill, IL; dad, Bernard Street of Walnut Hill, IL; grandchildren, Cadence, Kynnedi, Ryann, Ethan, Avery, and Austyn; as well as several nieces, nephews, cousins, and long-time close friends. Graveside Services for Steve Street will be held Thursday, July 16, 2020 at 2:30 PM at the Zion Grove Cemetery in Walnut Hill. In Honor of Steve, memorial donations may be made to the Zion Grove Cemetery Fund and will be accepted at the Sutherland-Garnier Funeral Home at 235 North Sycamore Street Centralia, Illinois 62801, (618)532-3253, who is honored to be of service to the Street Family. Online condolences may be made to the family by visiting www.sutherlandfuneralhome.com

Steven Joe Street, age 67, of Walnut Hill, IL, passed away peacefully in his home, Tuesday morning, July 14, 2020, with family by his side. Steve was born May 16, 1953 in Centralia, IL. He is the son of the late Mary (Skibinski) Street, and... View Obituary & Service Information

The family of Steven Street created this Life Tributes page to make it easy to share your memories.

Send flowers to the Street family.