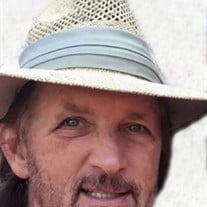 Steven Bruce Schaubert, carpentry artisan and professional angler and creative prophet came into the world in 1956 among many baby boomers in the post war period. Centralia hospital delivered him, Salem township raised him, and various towns and cities around the country (from Effingham to Joplin, Mt. Vernon to Birmingham, Altamont to New York City received what grace and service he had to offer. He attended SCHS ('74), Kaskaskia, SIU, and went to trade school as a carpenter and millwright. In that role, he swung a hammer for Jerry Schaubert's (his father's) construction company building homes, started his own company building both homes and businesses in town, and later worked for the Carpenter's Local Union in Illinois and Alabama and various other places. In 1975, he helped WJBD apprehend murderous convicts in a massive manhunt after they had escaped. He filmed the hunt and Sam Hancock of United Press International bought the film from him. Throughout the nighties and early aughties, he racked up hundreds of points on the semi- pro circuit for Major League Fishing, once scoring 111 points on a single bass during a rainy November week much like this one (a week no one else caught a thing). He would drop his work at a moment's notice at risk to his own physical health, financial stability, and sleep schedule in order to drive six, ten, eight hours for an emergency. Emergencies outside the family called him to drive across the country in order to help repair and build homes after the historic 2011 Joplin Tornado (where he rescued a homeless Akita, the 10-year-old Keisha), for hurricane victims during Katrina and Galveston, and other tragedies that required the service of a homebuilder. He had planned to travel more often internationally to help build homes in poverty stricken countries. To this end, he had been pursuing nonprofits in order to find a suitable place to teach carpentry to students and mission workers. He half crucified his body providing for his kids through Union work: two fused discs, metal rods, bionic shoulder, bionic knee. As a friend, Steve showed up when the fathers of friends passed, showed up for their hardest milestones, showed up to fix homes and encourage and cheerlead. On the cheerleading front, he also happened to be one of the original mascots (Wildcat) at SCHS and started the annual Salem tradition of shoving a pumpkin on that old statue of William Jennings Bryan's finger. Father Wilson Jerome Schaubert, and brother Michael Lee Schaubert preceded him in death. He is survived by fiancée Germania Bonilla Santos, mother Peggy Ann Schaubert, sister Pamela Jo (Schaubert) Bandy, the mother of his children Dena Marie [Wiggins] Kemp and her husband (and Steve's friend) Keith Kemp, children Lance Michael Schaubert (Tara Lee [Balu] Schaubert), Heath Ryan Schaubert (Ashley RaeAnne [Iffert] Schaubert), and Lauren Marie Schaubert as well as grandchildren Cooper Lexington, Cormick William, Colter Ray, Arthur Oberon Lee, and Eva Monroe (due 2/2/22). Ed Rankin was one of Steve's closest lifelong friends, therefore Steve's visitation will be held at Sutherland - Rankin Funeral Home from 6:00 - 8:00 pm on Monday, with funeral services beginning at 11:00 am on Tuesday in the Sutherland - Rankin Chapel. Any stories about Steve's life are most welcomed and should be sent to [email protected] or texted to 618.335.1193 for incorporation into the funeral, a mini biography, or simply for the kid's sake as they grieve in private. In lieu of flowers, please send a donation to Sutherland - Rankin Funeral Home, 310 N. Broadway, P.O. Box 97, Salem, Illinois 62881 (618) 548-1234 , entrusted with the family's care, to the Steve Schaubert Memorial Fund which will build houses for the displaced as well as reforest Appalachia.

Steven Bruce Schaubert, carpentry artisan and professional angler and creative prophet came into the world in 1956 among many baby boomers in the post war period. Centralia hospital delivered him, Salem township raised him, and various towns... View Obituary & Service Information

The family of Steven Bruce Schaubert created this Life Tributes page to make it easy to share your memories.

Send flowers to the Schaubert family.