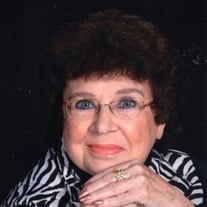 Stella A. Hollenkamp (née Schrage), beloved mother, grandmother, and great- grandmother, peacefully passed away on April 24, 2022 after receiving The Last Rites at St. Mary’s Hospital in St. Louis, Missouri. She was 89 years old. Stella was born at home on February 20, 1933 in Albers, Illinois, as the youngest of seven children from her parents, Herman and Verena (née Holtgrave) Schrage. She later moved to and was raised in Breese, Illinois, where she graduated from St. Dominic Catholic High School in 1951. Stella married Richard “Sonny” Hollenkamp from Carlyle, Illinois in 1953. Except for two years in Miami, Florida, they lived in the Southern Illinois towns of Centralia, Lebanon, Mt. Vernon, and Salem where they were the proud and loving parents of seven children. She was also a very devout Catholic, attending Mass and praying the rosary regularly for most of her adult life. Stella was preceded in death by her son, Roger (1981), husband, Richard (1999), and son-in-law, Gary (2021). She is survived by her children Ramona, Rhonda, Rick (Laurie), Randy (Patty), Rob (Linda), and Rodney, ten grandchildren, seven great- grandchildren, as well as many nieces and nephews. She loved all of her family dearly and traveled to visit them over the years across the Midwest, and in California, Texas, Tennessee, Kentucky, and Florida. There will be a public visitation on Monday, May 9, 2022 from 6:30pm to 8:30pm at Sutherland- Rankin Funeral Home (310 N. Broadway, Salem, IL 62881), with a rosary 30 minutes prior. A visitation from 9:30am to 10:30am will be held on Tuesday May 10, 2022 at the funeral home and will be followed with a Catholic Funeral Mass held at St. Theresa Catholic Church (812 Main Street, Salem, IL 62881) at 11:00am. Interment will be after the Funeral Mass at Paradise Cemetery in Salem, Illinois. In lieu of flowers, the family asks that memorial donations be made to the St. Theresa Catholic Church and will be accepted at the Sutherland-Rankin Funeral Home at 310 North Broadway/ P.O. Box 97 Salem, Illinois 62881, (618)-548-1234, who is entrusted with the family's care. Online condolences may be made to the family by visiting www.sutherlandfuneralhome.com.

The family of Stella Agnes Hollenkamp created this Life Tributes page to make it easy to share your memories.

Send flowers to the Hollenkamp family.