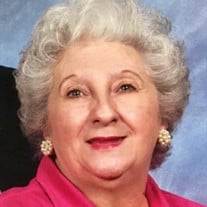 Shirlie Ann Jones, 84, of Centralia, went to be with her Lord and Savior on Monday, January 4, 2021 at her home. She was born February 14, 1936 in Fort Smith, Arkansas, the daughter of Fay Nation and Pauline (Robertson) Nation. She married Has O. "Bill" Jones on April 28, 1961 in Stilwell, Oklahoma and he preceded her in death on July 7, 2008. Shirlie is survived by her four children: Michael Fay Jones and Theresa Munoz of Gladstone, Missouri, Tina Jones Reichert and husband Michael of Centralia, Mitchell Jones of Irvington, and Teresa Jones Shafran and husband Jeff of Centralia; seven grandchildren: Ryan Jones, Phillip Young, Amanda Lilley, Blake Shafran, Jonathan Reichert, Emily Shafran, and Trent Owen Shafran; thirteen great- grandchildren: Kree, Kloe, Brynlee, Sophia, Juliana, Braydon, Hayden, Mikayla, Owen, Kaylee, Hannah, Emily, Natalie, and one on the way. She was preceded in death by her parents, husband, and a great-grandson: Krew. Shirlie was a life member of The Rock Church in Centralia, where she was a Sunday School Teacher and she enjoyed teaching her own Bible Study Group at her home. She was a Brownie Leader, Boy Scout Den Mother, a P.T.O. Mother for all of her four children and she was an adopted mother and grandmother to many. Shirlie started and was the Past President of the Super Seniors Group. She loved her children, grandchildren, family, her church family and friends. Funeral Services for Shirlie Ann Jones will be held Saturday, January 9, 2021 at 11:00 AM at The Rock Church in Centralia with Pastor Steve Upchurch officiating. Visitation will be held Friday, January 8, 2021 from 5:00 PM to 8:00 PM at the church and also on Saturday, January 9, 2021 from 10:00 AM until the time of service. Burial will follow at Hillcrest Memorial Park in Centralia. In lieu of flowers, memorial donations may be made to the family and will be accepted at the Sutherland-Garnier Funeral Home at 235 North Sycamore Street Centralia, Illinois 62801, (618)532-3523, who is honored to be of service to the Jones Family. Online condolences may be made to the family by visiting www.sutherlandfuneralhome.com and the Sutherland-Garnier Funeral Home Facebook Page.

Shirlie Ann Jones, 84, of Centralia, went to be with her Lord and Savior on Monday, January 4, 2021 at her home. She was born February 14, 1936 in Fort Smith, Arkansas, the daughter of Fay Nation and Pauline (Robertson) Nation. She married... View Obituary & Service Information

The family of Shirlie Ann Jones created this Life Tributes page to make it easy to share your memories.

Shirlie Ann Jones, 84, of Centralia, went to be with her Lord...