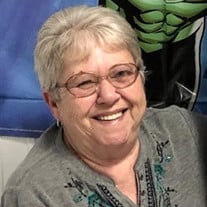 Sharon E. Hiltibidal, 76, of Centralia, passed away peacefully on Wednesday, September 23, 2020 at Barnes Jewish Hospital in St. Louis, Missouri, surrounded by her daughters. She was born March 3, 1944 in Centralia, the daughter of Fred Porter and Beulah (Stover) Porter. Sharon married Jimmie Hiltibidal on September 9, 1961 and he preceded her in death on August 10, 2007. She is survived by her three daughters: Terrie Johnson of Richview, Tammi Chapman and special friend Jeff Schulte of Central City, and Traci Kleiboeker and husband Keith of Central City; six grandchildren: Luke Connaway, Nick Connaway and special friend Tara Kelly, Noah Jackson and special friend Paige Hossler, Drew Jackson and special friend Jenna Kleiboeker, Brock Kleiboeker and Jordan Kleiboeker; four great-grandchildren: Kennedy Connaway, Ian Connaway, Kruz Jackson and Kade Jackson; a brother: Richard Porter of Centralia; two sisters: Alice Gelsinger of Centralia and Tina Altom and husband Joey of Centralia; a special niece: Debbie Braddy and husband Bob of Centralia; several nieces and nephews. Sharon was preceded in death by her parents, husband, three brothers: Marvin Porter, Dwayne Porter and Freddie Porter, and four sisters: Kay Hiltibidal, Brenda Wilkins, Jeanette Bailey, and Vickie Porter. Sharon worked at Littelfuse for many years and retired from there. She also worked at Centralia Estates for two years as a receptionist. Sharon was an amazing mother, grandmother and great-grandmother. She tried to attend every sport and school event for each grandchild and great-grandchildren. Sharon cherished the time she spent with her family and friends. A Graveside Service for Sharon Hiltibidal will be held Sunday, September 27, 2020 at 3:00 PM at the Gilead Cemetery in Centralia with Pastor Seth Baltzell officiating. Visitation will be held Sunday afternoon from 1:00 PM to 2:45 PM at the Sutherland-Garnier Funeral Home in Centralia. In lieu of flowers, memorial donations may be made to Six Lemons and will be accepted at the Sutherland-Garnier Funeral Home at 235 North Sycamore Street Centralia, Illinois 62801, (618)532-3523, who is honored to be of service to the Hiltibidal Family. Online condolences may be made to the family by visiting www.sutherlandfuneralhome.com and the Funeral Home Facebook Page.

Sharon E. Hiltibidal, 76, of Centralia, passed away peacefully on Wednesday, September 23, 2020 at Barnes Jewish Hospital in St. Louis, Missouri, surrounded by her daughters. She was born March 3, 1944 in Centralia, the daughter of Fred Porter... View Obituary & Service Information

The family of Sharon Hiltibidal created this Life Tributes page to make it easy to share your memories.

Send flowers to the Hiltibidal family.