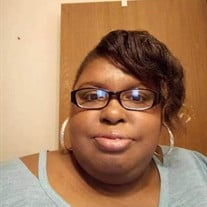 Shannon “Nickie” Jones, 51, of Centralia, passed away Thursday, January 13, 2022 at SSM Health St. Mary's Hospital in Centralia. She was born January 18, 1970 in Centralia, the daughter of Roy McGee and Sharon Jones. She is survived by her daughter: Jessica Neal of Centralia; her son: Cameron Jones of Centralia; seven grandchildren; three brothers: Damian Roman of Chicago, Patrick Jones of San Diego, CA, and Anthony Mitchell of Carlyle; special aunt: Janet Isaiah and husband Oscar of Centralia; aunts: Freda McGee of Centralia, Oberta “Penny” Giboney-Williams of St. Louis, Missouri; several aunts, uncles, nieces, nephews, special cousin: Morgan Isaiah of Centralia, and several cousins; special friends: Berk Cunningham and Tisha Matthews; special friend: Sharon Little of Centralia; and father of her children: Jesse Neal of Centralia. Shannon was preceded in death by her parents: Roy McGee and Sharon Jones, a grandson: Josiah Branch, grandparents: John Henry Jones and Catheryn Jones, and several aunts and uncles. Shannon worked as a CNA at Fireside House of Centralia. She enjoyed watching wrestling and sports on T.V. She also enjoyed playing video slots and scratching off lottery cards. Shannon cherished her grandchildren and loved spending time with them, her family and friends. A Celebration of Life Service for Shannon Jones will be held Saturday, February 5, 2022 at 12:00 PM at the Sutherland-Garnier Funeral Home in Centralia. Visitation will be held Saturday morning from 10:00 AM until the time of service. In lieu of flowers, memorial donations may be made to the family and will be accepted at the Sutherland-Garnier Funeral Home at 235 North Sycamore Street Centralia, Illinois 62801, (618)532-3523, who is honored to be of service to the Jones Family. Online condolences may be made to the family by visiting www.sutherlandfuneralhome.com and the Sutherland-Garnier Funeral Home Facebook Page.

The family of Shannon "Nickie" Nicole Jones created this Life Tributes page to make it easy to share your memories.