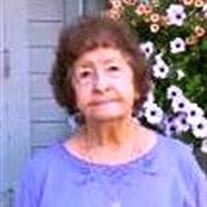 Sadie Sue (Hughes) Word, 95, died peacefully at Doctor's Nursing and Rehab in Salem, Illinois from progressive dementia and other health issues. She spent two years at Doctor's and two 1/2 great years at Salem Manor. She was born in El Dorado, Arkansas on July 1, 1925. Her family moved to Illinois during the early 40's due to the oil boom. She spent her high school years and the rest of her life in Salem. She worked almost twenty years at the old Holiday Inn and seventeen years at Rollinson Home Center, doing what she did best "Housekeeping." She always strived for excellence in her work and care of others around her. Sadie S. Word was the dear mother of Linda Word of Ballwin, MO, Harry Word (Terry) of Salem; dear Grandmother to Jeremy Word (Beth) of Springfield, IL, Dustin Word (Amy) of Gulf Shores, AL, and Shanda Word Runkle (Jered) of Salem; Dear Great Grandmother to Clayton, Hayley, Layla, Aliviah, Gage, and Avery; Great Aunt to Donna Matanane of Keysport, IL, Sarah Bierman (Tim) of Centralia, IL, Timmy Hughes (Mary Lou) and Kevin Hughes (Rochelle) of Federal Way, WA, Darla Gradeless of Roanoke, IN and Terri Mullins (Rich) of New Albany, IN. Also cousins all over the U.S. and friends. Mrs. Word was preceded in death by her husband Harry D. and both parents Mary and Philip S. Hughes, two brothers Philip S. Hughes Jr. (Margaret) and Charles Hughes (Pauline), an uncle like a brother Walter Little and great grandson Leland R. Runkle. She was a life-long member of the Salem First Baptist Church. She enjoyed spending time with friends and family. In later retirement years, she and her friends were almost professional resale and consignment shoppers. Her family and friends will dearly miss sweet Sadie, but are thankful she was a born-again Christian and is resting with the Lord. Funeral Services for Sadie S. Word will be private, with a Graveside Service for family only at the Paradise Cemetery in Salem due to Covid-19 restrictions. In lieu of flowers, contributions may be made to the Salem First Baptist Church Children's Ministry Program and will be accepted by the Sutherland-Rankin Funeral Home at P.O. Box 97, Salem, IL 62881 (618) 548-1234, who is entrusted with the family's care. Online condolences may be made to the family by visiting www.sutherlandfuneralhome.com or the Funeral Home's Facebook page.

The family of Ms. Sadie Sue Word created this Life Tributes page to make it easy to share your memories.

Send flowers to the Word family.