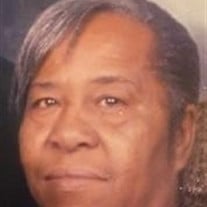 Rubbie M. O’Neal, 75, of Centralia, passed away peacefully Monday, August 30, 2021, at Carlyle Health Care Center. Rubbie was born May 17, 1946, in Grenada, MS, the daughter of Levi Williams Sr. and Luberta (Dunn) Williams. She married Jesse O’Neal, Sr. in 1962 and they later divorced. Rubbie is survived by her three children: Thelma Wooters and husband Roland “Patrick” Wooters, Sr. of Centralia, Jesse O’Neal Jr. of Centralia, and Wainatta “Juanita” Jackson of Charleston, ten grandchildren: Sharica O’Neal, Dontea O’Neal, Shajuana O’Neal, Roland Wooters, Jr., Shanika Jackson, Shauna Jackson, Sharesa Houser, Maya Carter, Richard Carter and Brodrick Wooters (Quita), ten great-grandchildren, twelve brothers and sisters: Flora Willis (Big Sister and Best Friend) of Centralia, Mary Williams of Grenada, MS, L. C. Williams of Grenada, MS, Earl Williams of Grenada, MS, Berta Offutt (Phillip) of Centralia, T. J. Williams (Josephine) of Grenada, MS, Minnie Mister (Monte) of Grenada, MS, James Henry Hubbard (Ernestine) of Grenada, MS, Calvin Hubbard of Grenada, MS, Patricia Tedford (Dale) of Grenada, MS, Kenny Willis of Grenada, MS, Dorothy O’Neal of Memphis, TN; and a host of nieces, nephews, cousins, and friends; Special friends: Delmar Hill, Nedra Johnson, and Sandy Crump. Rubbie was preceded in death by her parents: Levi and Luberta Williams, Sr, infant son: Kerwin O’Neal, daughter: Brenda K. O’Neal, granddaughter: Tawatha “Wawa” Wooters, two brothers: Joel Williams and Levi “Lawyer” Williams, Jr. Rubbie had a heart of gold; she showed unconditional kindness. She never knew a stranger. She would give you the shirt off her back or her last dime. She was the neighborhood taxi driver; often driving neighbors and friends to their appointments, school, or the grocery store. She would feed you if you were hungry and she would take you in if you were down on your luck. She was the neighborhood babysitter; pretty much raised a lot of kids. She had a way with words that would make anyone laugh even if you were having a bad day; some would say she was a comedian. Rubbie enjoyed fishing. She would often say; I can’t fish anymore because I’m too busy raising grandbabies. She enjoyed cooking (she made the best fried peach pies, sweet potato pies, custard pies, and lemon cakes). She enjoyed singing in church, playing Yahtzee, and watching her favorite tv shows. Most of all, Rubbie loved spending time with her family and friends. She was especially proud of her grandchildren and great-grandchildren. A Celebration of Life Service for Rubbie M. O’Neal will be held Saturday, September 11, 2021, at 1:00 pm at the Sutherland-Garnier Funeral Home in Centralia with Minister Benton Willis officiating. Visitation will be held Saturday morning from 11:00 am until the time of the service at the funeral home. In lieu of flowers, memorial donations may be made to the family and will be accepted at the Sutherland-Garnier Funeral Home at 235 North Sycamore Street, Centralia, Illinois, 62801, (618)532-3523, who is honored to be of service to the O’Neal Family. Online condolences may be made to the family by visiting www.sutherlandfuneralhome.com and the Sutherland-Garnier Funeral Home Facebook Page.

The family of Rubbie O'Neal created this Life Tributes page to make it easy to share your memories.

Send flowers to the O'Neal family.