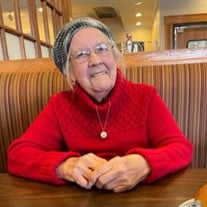 Rozella Pauline (Brubaker) Thomas, 91, formerly of Salem, passed away peacefully at her granddaughter’s home in Herrin, IL Friday June 17th with her family by her side. Rozella was born July 26, 1930, in Raccoon Township, Marion County, IL to Merle Birdette and Ida Mae (Parkinson) Brubaker. Rozella worked for Brown Shoe Company for many years until it closed in 1975, then at Salem Township Hospital until she retired. Rozella will be remembered by those who knew her as “ageless” as she failed to have wrinkles even into her 90’s! She was sweet, she was kind, she was stern when she needed to be. She loved to go shopping and would find any excuse to go to Walmart. She enjoyed crocheting blankets, potholders, and many other gifts for her family and friends. If you needed a recipe, she was guaranteed to have it in several variations and a story to go along with it. Christmas movies were always on her tv, and she was always in the mood for a hot fudge sundae. Rozella loved spending time with her family, especially her great and great-great grandchildren. Rozella will be missed dearly by all who knew her. We’ve heard her stories and shared memories we will hold in our hearts forever. Rozella is survived by her son-in-law, Steven Ray Smith; grandchildren, Karen Louise (Smith) Pender and husband, Carl; Brenda Lee Golden; John Richard Smith and wife Amanda. Great grandchildren, Alexander Lee Scheer and fiancé Shylene, Terry Pender, Taylor Nicole (Smith) Montgomery and husband Grant, Madison Renae Golden, Makayla Jo Golden, Christian Alexander Medina and fiancé Anna, Santos Giovanna Medina, Jason Robert Davis, Elisabeth Elvira Wright; great-great grandchildren Abel John Scheer, Franklin Ray Montgomery, Olivia Jane Montgomery, Briar Rose Montgomery, Ellianna Jo Golden, Alayna Rose Medina, Xaedyn Ray Medina. Sister Karon Sue (Brubaker) Mills and husband Mike. Brother-in-law Allan Osborne. Nieces and nephews, Rockne Brubaker, Ronna Tate, Donna Coleman, Rhonda Gage, and Mike Osborne. Rozella is also survived by son #2 Lynn Gardener, who was like a son to her and she loved him for as long as she knew him. August 22, 1949 Rozella married the love of her life, Darrell Lee Thomas and he preceded her in death in 1994. She was also preceded in death by her parents, her mother-in-law and father-in-law Bacel and Hazel (Sill) Thomas; siblings, Wanda Pearl (Brubaker) Snyder and husband Claude Snyder, Lee Birdette Brubaker and wife Gladys, sister-in-law Joyce (Thomas) Osborne; daughter Terry Lee (Thomas) Smith and son Kenneth Michael Thomas; nieces and nephews, Claudine, Melvin, Louise, and Lois Snyder, Brenda Walker, Jeff Osborne, and grandson Steven Ray Smith, Jr. Friends and family may gather to celebrate Rozella and share memories of her Friday June 24, 2022 at 9:00 AM to 10:45 am, followed by a graveside service at 11:00 am, at Paradise Cemetery in Salem. Memorials may be made to Hospice of Southern IL, American Cancer Society, or the Donor’s choice and will be accepted by the Sutherland-Rankin Funeral Home, P.O. Box 97, 310 North Broadway, Salem, Illinois 62881, (618)548-1234, entrusted with the family's care. Online condolences may be left at www.sutherlandfuneralhome.com.

Rozella Pauline (Brubaker) Thomas, 91, formerly of Salem, passed away peacefully at her granddaughter&#8217;s home in Herrin, IL Friday June 17th with her family by her side. Rozella was born July 26, 1930, in Raccoon Township, Marion County,... View Obituary & Service Information

The family of Rozella Pauline Thomas created this Life Tributes page to make it easy to share your memories.

Send flowers to the Thomas family.