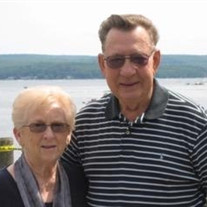 Rose C. Sutherland, age 87, and William D. (Bill) Sutherland, age 88, of Wichita, Kansas, passed away peacefully December 25 & 26, 2021, respectively. They were loving parents, grandparents, aunts, uncles, and loyal friends. Rose was born on Gwynn's Island, Virginia, the fourth child of William J. And Nancy (Hudgins) Carney. She had three sisters, Jeri (husband Jim) Wilson, Sunie (husband Everett) Brown, Alice (husband Gerald “Smitty”) Smith, and one brother, Otis (wife Faye) Carney. They all preceded her in death. Bill was born in Salem, Illinois the third son of John A. and Maggie (Phillips) Sutherland, both who preceded him in death. In addition, he was preceded in death by his four (4) brothers: Dale (wife Pat), Armond (wife Anita), Otis (wife Dorothy) and David (wife Ruth). Bill and Rose were united in marriage on August 10, 1955, on Gwynn’s Island, Virginia. Both Rose and Bill were also preceded in death by their daughter, Lisa Lynn Sutherland who was stillborn on February 26, 1958. Bill was a Korean War veteran and worked in the Energy Sector for over 37 years, retiring from Koch Industries in 1995. His career took him to various locations around the United States and international locations. Rose was a stay-at-home mom until she became an elementary school secretary with the El Dorado, Kansas school district in 1979. She retired in 1995. After retirement they both followed their love of travel and made many trips inside and outside the United States, many on mission trips to help other Christians around the world. Rose and Bill retired to Lakeland Florida where they enjoyed travels, sunshine, and friends. In 2012 they moved to Guymon, OK to be closer to their children and grandchildren. To carry on their legacy, Rose and Bill leave behind their children, John (wife Carolyn) Sutherland of Wichita, Kansas. Jamie (husband Mark) Kokaly of Guymon, Oklahoma. Grandchildren; Sydney Sutherland of Prairie Village, Kansas, Reid (wife Ellen) Sutherland of Greenwood Village, Colorado, McCully Kokaly of Fort Worth, Texas, and Riley Kokaly of Guymon, Oklahoma. A Celebration of Life for Rose and Bill will be held on Saturday January 29,2022 at 12:00 pm at the Sutherland Funeral Home located at 235 N Sycamore St, Centralia, Illinois. Masonic Rites will be accorded Saturday morning at 10:45 am at the funeral home .Visitation will be held Saturday from 11:00 am until the time of service at the funeral home. In Lieu of flowers Rose and Bill have requested, Memorials may be made to Gwynn's Island Baptist Church or the Oklahoma Baptist Home for Children and will be accepted at the Sutherland Funeral Home at 235 North Sycamore Street Centralia, Illinois 62801, (618)532-3523, who is honored to be of service to the Sutherland Family. Online condolences may be made to the family by visiting https://www.sutherlandfuneralhome.com and the Sutherland Funeral Home Facebook Page. Our family thanks you all for the love and prayers!

The family of Rose C. Sutherland created this Life Tributes page to make it easy to share your memories.