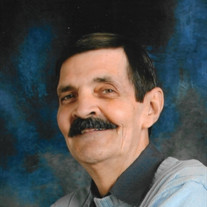 Roland Telford Roland Lee Telford, 70, of Hoffman passed away Sunday, February 7, 2021 in his home in Hoffman. Roland was born May 24, 1950 in Centralia, the son of Oral Telford and Lorraine (Gherardini) Telford. He married Sandra (Spencer) Telford on August 14, 1982 in Centralia and she survives him in Hoffman. In addition to his wife Sandra Telford of thirty-eight years, Roland is survived by two sons: Scott A. Telford and wife Whitney of Troy and Ryan Telford and wife Lyn of Fargo, ND; two grandchildren: Nick and Emily Rae of Fargo, ND; one sister: Donna Powers of Carolina Shores, NC; his mother-in-law: Jane Spencer of Hoffman; two brothers-in-law: Mike and wife LuAnn Spencer of Council Bluffs, IA and Terry Spencer and wife Marti of Salem; several nieces and nephews; and his best friend Ted Meisenheimer and his faithful, lap warming companion Pepper. Roland was preceded in death by his parents: Oral and Lorraine Telford; father-in-law Cecil Spencer; brother-in-law: Jerry Powers. Roland was a U.S. Navy veteran having served in various theaters of operation from 1969-1973 with the U.S. Navy Security Group (USNSG). He was a member of Centralia Elks B>P>O>E 493 and Moose Lodge in Centralia. He retired in 2005 after spending 31 years in the telecommunications industry. He was a member of the Trinity Lutheran Church of Hoffman. He enjoyed playing golf, hot rods, camping, reading, photography, and astronomy. He was Mr. Fix It. He will be dearly missed by his family and friends. Funeral Services for Roland Telford will be held on Wednesday, February 10, 2021 at 11:00 am at the Sutherland Garnier Funeral Home in Centralia. Visitation will be held Wednesday, February 10, 2021 from 9:00 am till 11:00 am. at the funeral home. Private family burial will follow at Hillcrest Memorial Park in Centralia. In lieu of flowers, memorial donations can be made to Second Chance Animal Rescue in Vandalia and will be accepted at Sutherland-Garnier Funeral Home at 235 North Sycamore Street Centralia, Illinois 62801, (618)532-3523, who is honored to be of service to the Telford Family. Online condolences may be made to the family by visiting www.sutherlandfuneralhome.com and the Sutherland-Garnier Funeral Home Facebook Page.

Roland Telford Roland Lee Telford, 70, of Hoffman passed away Sunday, February 7, 2021 in his home in Hoffman. Roland was born May 24, 1950 in Centralia, the son of Oral Telford and Lorraine (Gherardini) Telford. He married Sandra (Spencer)... View Obituary & Service Information

The family of Roland Telford created this Life Tributes page to make it easy to share your memories.

Send flowers to the Telford family.