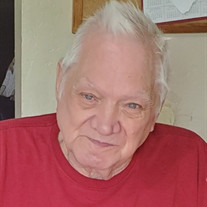 Robert T. Day, 84, of Springfield, passed away Saturday, October 30, 2021 at Doctor’s Nursing Home and Rehab Center in Salem. He was born July 5, 1937 in Champaign, Illinois, the son of Edward Day and Floretta (Lane) Day. He married Rebecca L. Scoggins and she survives in Arkansas. In addition to his wife, Becky Day of Arkansas, he is also survived by his four children: Robin Sermons of Junction City, Debbie Day of Junction City, Barb Acevedo of Springfield, and Brittany Day of Arkansas; twelve grandchildren: Johnny, Brandy, Melanie, Destry, Lance, Coleman, Camdyn, Bailey, Briley, Aveana, Madison and Aurora; nine great-grandchildren; several nieces and nephews. Robert was preceded in death by his parents, a daughter: Bridget Day Bayless, a brother: Jerry Day, and a sister: Kathryn Laroe. Robert worked in Construction for many years. He was an avid huntsman, fisherman, and mushroom hunter. He enjoyed playing BINGO and doing carpenter work. Most of all Robert loved spending time with his family and friends. Per Robert’s wishes, cremation rites will be accorded and no public services will be held. Sutherland-Garnier Funeral Home and Cremation Services at 235 North Sycamore Street Centralia, Illinois 62801, (618)532-3523, are honored to be of service to the Day Family. Online condolences may be made to the family by visiting www.sutherlandfuneralhome.com and the Sutherland-Garnier Funeral Home Facebook Page.

The family of Robert Thomas Day created this Life Tributes page to make it easy to share your memories.

Send flowers to the Day family.