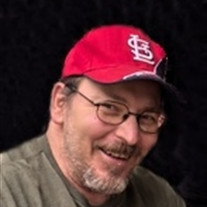 Richard “Rick” A. Wesling, Jr., 53, of Junction City, passed away Monday, September 7, 2020 at SSM Health St. Mary’s Hospital in Centralia. He was born August 14, 1967 in Centralia, the son of Richard A. Wesling, Sr. and Carol (Dilg) Wesling Free. He married Donna DePuy on November 6, 1987 and she survives in Junction City. In addition to his wife of 32 years, Donna Wesling of Junction City, he is also survived by his parents: Richard “Bud” A. Wesling and wife Nancy of Salem and Carol Free of Junction City; three children: Richard John Wesling of Junction City, Dusti Wesling of Clarksville, Tennessee, and Cherokee Ray of Junction City; two grandchildren: Lavena Mae Wesling and Richard Scott Wesling; two brothers and two sisters: Becky Wesling of Odin, Joe Free of Bethalto, T.J. Free of Salem, and Melynda Breeze and husband Adam of Mt. Vernon; several nieces and nephews; an uncle: Tim Dilg and wife Vicky of Junction City; and an aunt: Barb Fetgatter of Centralia. He was preceded in death by his grandparents: John Dilg and wife Virginia and Richard “Hank” and Mary Wesling, his mother-in-law: Linda Cook, and an uncle: Sonny Dilg. Rick served in the U.S. Army. He was an avid St. Louis Cardinal and Dallas Cowboy Fan. He enjoyed watching all types of sports. Rick was an avid fan of obscure music and could sit and talk music with anyone for hours. He was a past 30 year member of the Centralia Moose Lodge. Rick cherished the time he spent with his grandkids, family and friends. Per Rick’s wishes, cremation rites will be accorded and a Memorial Service will be held at a later date. In honor of Rick, memorial donations may be made to the Wounded Warriors and will be accepted at the Sutherland-Garnier Funeral Home and Cremation Services at 235 North Sycamore Street Centralia, Illinois 62801, (618)532-3523, who is honored to be of service to the Wesling Family. Online condolences may be made to the family by visiting www.sutherlandfuneralhome.com and the Sutherland-Garnier Funeral Home Facebook Page.

The family of Richard "Rick" A Wesling, Jr. created this Life Tributes page to make it easy to share your memories.

Send flowers to the Wesling family.