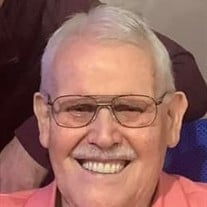 Richard Noel Rich, 83, of Centralia, passed away, Saturday, February 19, 2022 at Centralia Manor. He was born the son of Noel Rich and Esther (Parmley) Rich on August 13th, 1938 in Centralia. Richard married Barbara J. Dilg of Junction City in 1958 and they later divorced. He married Jennette Eells in 1989 and they later divorced. Richard is survived by his daughter: Tanga Coffey and husband Brad of Centralia and son: Tony Rich of Centralia; a step Son: Jeff Eells and wife Christy of Winterville, NC; daughter-in-law: Michelle Eells of Ithaca, NY; three grandchildren: Jordan Coffey, Tyson Coffey and wife Karlie and Bethany Essner and husband Michael all of Centralia; three step Grandchildren: Kayla Eells, Cole Eells and Cade Eells all of Ithaca, NY; great-grandson: Shepherd Coffey; sister: Elizabeth Risinger of Owensboro Ky,; several nieces and nephews. He was preceded in death by his parents, step-son: Greg Eells, brother; Marlin Rich, sister: Mary Kathleen Bryant, brother-in-law: Steve Bryant, and brother-in-law Bill Risinger. Richard graduated from Centralia High School in 1956, he then attended Centralia Jr. College in 1965, he graduated from Eastern IL University with his Bachelors Degree in 1968, and in 1970 he graduated from Eastern IL University with his Masters. Richard was in education for 34 years. He was a Counselor and Dean of Students at Centralia High School for 20 years. He was the Principal at Sandoval Jr. High and High School for 4 years. He was employed with Patoka High School as a Counselor for 10 years. He was also a member of the board of trustees of Kaskaskia College. Richard was deeply involved with Central City Baptist and served in several Leadership Positions in the church. He enjoyed serving his Lord and Savior in any way he could. Services will be held Wednesday, February 23, 2022 at 1:00 PM at the Central City Baptist Church, 304 South Broadway, with Rev. Mike King officiating. Burial will follow at Hillcrest Memorial Park of Centralia. Visitation will be held Wednesday morning from 10:00 AM until the time of service at the Central City Baptist Church. For those who wish, memorial donations can be made to the Central City Baptist Church, CHS Alumni Association, World Vision, and Wounded Warriors and will be accepted at the Sutherland-Garnier Funeral Home at 235 North Sycamore Street Centralia, Illinois 62801, (618)532-3523, who is honored to be of service to the Rich Family. Online condolences may be made to the family by visiting www.sutherlandfuneralhome.com and the Sutherland-Garnier Funeral Home Facebook.

The family of Richard N. Rich created this Life Tributes page to make it easy to share your memories.

Send flowers to the Rich family.