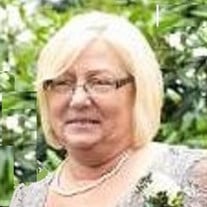 Paula “Beth” Mifflin, 56, of Centralia, passed away on Monday, July 13, 2020 at her home. She was born September 26, 1963 in Centralia, the daughter of Robert Wilkey and Velva (Wert) Wilson. She married Tony Mifflin in 1986 and they later divorced. In addition to her mother, Velva Wilson of Centralia, she is also survived by her three daughters: Jamie Rimel of Smithton, Pennsylvania, Taylor Silvas and husband Martin of LaMarque, Texas, and Sarah Correll of Centralia; five grandchildren: Lane Rimel, Kaisen Correll, Johnny Silvas, Zaedyn Silvas, and Journey Correll; a brother: Robert Wilkey and wife Jenna of Salem; two sisters: Denise Brittingham of Belleville and Sheila Ogilbee and Lee of Castle Rock, Colorado; uncle: Lloyd Wert and significant other Fran Garrison of Centralia; aunt: Jo Ann McClarren of Centralia; several nieces and nephews; and special friend Ron Boles of Galveston, Texas. Beth was preceded in death by her father: Robert Wilkey, a brother: Timothy Howell, maternal grandparents: Harold and Millie Wert; stepmom: Judy Wilkey; and stepfather: Ross Wilson. Beth was a member of the Eternity Baptist Church in Centralia. Her greatest enjoyment was spending time with her grandchildren. Graveside Services for Paula “Beth” Mifflin will be held Saturday, July 18, 2020 at 10:00 AM at Hillcrest Memorial Park in Centralia. In Honor of Paula, memorial donations may be made to the Family and will be accepted at the Sutherland-Garnier Funeral Home at 235 North Sycamore Street Centralia, Illinois 62801, (618)532-3253, who is honored to be of service to the Mifflin Family. Online condolences may be made to the family by visiting www.sutherlandfuneralhome.com

The family of Paula Mifflin created this Life Tributes page to make it easy to share your memories.

Send flowers to the Mifflin family.