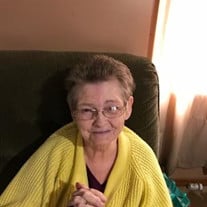 Patsy Piercy, 81, of Centralia, passed away Monday, April 11, 2022 at Centralia Fireside Nursing Home. She was born June 27, 1940 in East York Township, the daughter of Fred Donald Adams and Opal Thelma (Belcher) Adams. She is survived by her three daughters: Deborah Lewis and husband Bill of Centralia, Rebecca Woodward of Centralia, and Rhonda Gray and fiancé Timothy Johnson of Centralia; grandchildren: Corey Foster and wife Mallory of Casey, Kyle Foster and wife Rachel of Centralia, Matthew Mulvin of Centralia, Jeremy Woodward and wife Jessica of Centralia, Justin Woodward and wife Sarah of Effingham, Joseph “JD” Gray of Centralia, and Sierra Gray and fiancé Jonathan Mathis of Centralia; great-grandchildren: Bennett, Brynn and Ayla of Casey, Ezekiel, Matilda, and Eli of Centralia, and Jace Mathis of Tennessee; sister: Mary Basola of Sandoval, Wanda Rybicki of Ashley, and Thelma Houston and husband Tom of Patoka; sisters-in-law: Pam Adams of Florida and Marcia Piercy of California; and several nieces and nephews. She was preceded in death by her parents: Fred and Opal Adams, daughter: Kimberly Green, granddaughter: Deborah Jane “DJ” Piercy, sister: Donna Winkler, and three brothers: JK Adams, Darrell Adams and Lonnie Adams. Patsy spent most of her life as a factory worker. She also worked alongside her husband for several years as a Centralia Sentinel paper carrier. She married the love of her life, Douglas Piercy on March 12, 1960, who preceded her in death by 2 months and 2 days on Feb. 9. Patsy grew up in a large family where love, dignity, respect, and kindness were instilled upon her as lifelong traits. Those family values were carried by her throughout her life while working hard and raising her own family. She raised her children with an open-door policy welcoming friends and even friends of friends as extended family. This was a lifelong habit as she continued to add to her list of extended family while helping at her daughter and son in laws daycare where she quickly became known as Grandma great. In Patsy’s later years she was stricken with dementia/Alzheimer’s. This horrible disease consumed her to the point that it was necessary to place her where she would be cared for. Choosing a new home that would measure up to the qualities Patsy had lived by was achieved when Fireside House was chosen to be her forever home. Although plagued as a victim of a disease that would eventually rob her family and friends of the person they had known and loved, there was never a lapse of her being surrounded by people who loved her unconditionally due to the dedication and compassion shown her by the staff of Fireside. Family was everything to Patsy and Douglas Piercy. They spent their entire lives building family dynamics including not only immediate next of kin but a vast assortment of adopted children, and grandchildren known to them thru their own children and friends. They were dubbed with many loving terms of endearment by a multitude of those who treated them as surrogate parents, and grandparents. They will forever be loved and missed and always be remembered fondly. Per Douglas and Patsy’s wishes, cremation rights were to be executed and a Graveside service will be held at Hillcrest Memorial Park in Centralia, on April 23, 2022 at 11AM, where their Earthly remains will be entered together forever. Anyone who wishes to share in their final journey may attend with an informal dinner will follow. In lieu of flowers, memorial donations may be made to the Activity Fund at the Centralia Fireside Nursing Home and will be accepted at the Sutherland-Garnier Funeral Home and Cremation Services at 235 North Sycamore Street Centralia, Illinois 62801, (618)532-3523, who is honored to be of service to the Piercy Family. Online condolences may be made to the family by visiting www.sutherlandfuneralhome.com and the Sutherland-Garnier Funeral Home Facebook Page.

Patsy Piercy, 81, of Centralia, passed away Monday, April 11, 2022 at Centralia Fireside Nursing Home. She was born June 27, 1940 in East York Township, the daughter of Fred Donald Adams and Opal Thelma (Belcher) Adams. She is survived by... View Obituary & Service Information

The family of Patsy Piercy created this Life Tributes page to make it easy to share your memories.

Send flowers to the Piercy family.