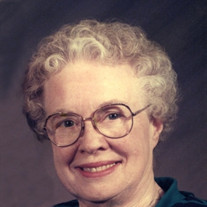 Norma E. Lawson, 98 of Salem, Illinois passed away at Twin Willow Nursing Center on Sunday, May 16, 2021. Born October 29, 1922 in Xenia, Illinois, she was the daughter of Elmer and Jennie (Staudenmaier) Eakins who preceded her in dearth. She was a pastors wife, a member of New Liberty General Baptist Church-Iuka, IL and attended the Salem General Baptist Church. Norma was very active in the Ladies Jolly Workers, serving as it secretary for 35 years. She was also part of the Minister's Wives and the church mission society. She worked for the Woodruff family for many years in housekeeping at the Continental Motel, and they helped care for her in later years while living in Twin Willow Nursing Center.. She united in marriage with Delbert T. Lawson, March 20, 1943 in Marion County, Illinois and he preceded her in death. Surviving are her children, Robert Lawson and wife Janet of Collinsville, IL and Janet Butts and husband Calvin of Maryville, IL, along with her grandchildren Dennis and wife Cathryn Butts, David and wife Shelley Butts, Daniel Butts, and Chad and wife Emily Lawson, along with great grandchildren Kerissa (Billy) Burge, Zaccary (Jessica Carroll) Butts, Dennis Butts, Cayden Butts, Nick Dalton and Tim Dalton. along with several great great grandchildren including Payton, Hunter, Trenton, Owen, Maddie, Austin and Ava. In addition to her husband and parents, she was preceded in death by her siblings Virgil Eakins, Victor Eakins, Dora Fisher and Louise Wolfe. Funeral services will be 1:00 p.m. Saturday at the Sutherland - Rankin Funeral Home, with burial to follow at the Paradise Cemetery in Salem. It is important to wear a mask if you feel it necessary and to respect social distancing. Visiting hours will be from 11:00 am until the service hour on Saturday. The family suggest memorials be made to New Liberty General Baptist Church, Salem General Baptist Church, or to the Donor's choice and will be accepted by the Sutherland - Rankin Funeral Home, P, O. Box 97, 310 N. Broadway, Salem, IL 62881 (618) 548-1234, entrusted with the family's care. On line expressions of sympathy may be left at sutherlandfuneralhome.com.

Norma E. Lawson, 98 of Salem, Illinois passed away at Twin Willow Nursing Center on Sunday, May 16, 2021. Born October 29, 1922 in Xenia, Illinois, she was the daughter of Elmer and Jennie (Staudenmaier) Eakins who preceded her in dearth. She... View Obituary & Service Information

The family of Norma E. Lawson created this Life Tributes page to make it easy to share your memories.

Send flowers to the Lawson family.