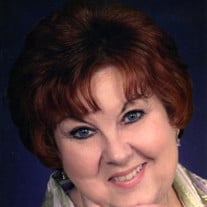 Nelda Fay Zinser, 71, of Kinmundy, Illinois passed away after a lengthy and brave battle with Alzheimer's, September 9, 2020 at Centralia Manor, her devoted husband of 56 years by her side. Born March 13, 1949 in Salem, IL, she was the daughter of Darrell D. and Mary (Mulvany) Reese. She retired from Rollinson's Home Center in Salem, where she was known as "The Paint Lady." She was a faithful member of the Kinmundy Christian Church. She was a former member of the Southern Illinois Homecoming Gospel Choir for many years, the Daughters of the American Revolution, and was a Charter Member of Beta Sigma Phil, honored as "Woman of the Year" in 2014. She served many years as the Kinmundy City Clerk. She was a faithful wife, mother and grandmother and loved her family dearly. She married Ronald L. "Ron" Zinser August 22, 1964 in St. Louis, MO and he survives in Kinmundy, along with daughter Tina. M. Henson and husband Travis of Breese, IL, Ronda Bradley and husband Joseph of St. Louis, MO and son-in-law, Brad Updike of Omaha, NE along with grandchildren Paige (Daniel) Becking of Niceville, FL,, Adam Updike and Grace Updike both of Omaha, NE and Sydney Bradley of St. Louis, MO. Also her great granddaughter, Blair Becking of Niceville.. In addition to her parents, she was preceded in death by her daughter loving MaLisa Updike, and sisters Karen Skeens and Helen Marie Reese. Funeral services will be at 4:00 pm Sunday at the Kinmundy Christian Church with minister Josh Conley officiating. Burial will be 11:00 am Monday at Sandy Branch Cemetery, Alma, IL. Visiting hours will be from 2:00 pm until the service hour on Sunday at the Kinmundy Christian Church. Due to the present health concerns, it is suggested you wear masks, observe minimal personal contact and practice social distancing while attending services. The family suggest memorials honoring Nelda be made to the KCC Kids, or Alzheimer's Association - "Nelda's Ninjas" and will be accepted by the Sutherland - Rankin Funeral Home, 310 N. Broadway, P.O. Box 97, Salem, Illinois, 62881, (618) 548-1234. On line condolences may be left at sutherlandfuneralhome.com.

Nelda Fay Zinser, 71, of Kinmundy, Illinois passed away after a lengthy and brave battle with Alzheimer's, September 9, 2020 at Centralia Manor, her devoted husband of 56 years by her side. Born March 13, 1949 in Salem, IL, she was the daughter... View Obituary & Service Information

The family of Ms. Nelda Fay Zinser created this Life Tributes page to make it easy to share your memories.

Nelda Fay Zinser, 71, of Kinmundy, Illinois passed away after...

Send flowers to the Zinser family.