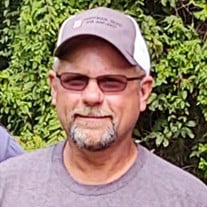 Neil David Haake, 60, of Hoyleton, passed away Thursday, September 23, 2021 in Paducah, KY. Neil was born August 30, 1961 in Centralia, IL, the son of Marvin Haake and Lorraine (Maschhoff) Haake. He married Linda (Eversgerd) in the Trinity Lutheran Church of Hoyleton on April 1, 1989 and she survives him in Hoyleton. In addition to his wife Linda Haake of 32 years, he is survived by his son Ryan Haake and fiancé Emily Kracht of Hoyleton; two daughters: Andrea Calland and husband Michael Murphy of Warsaw, KY and Allison Haake and fiancé Jeremy Albers of Carlyle, IL; four grandchildren: Elyana, Gabriel, Savana, and AJ; two sisters: Karen Guenther and husband Greg of Valley Park, MO and JoEllyn McMillan and husband Dave of Omaha, NB; sister-in-law: Diane Mattmiller and husband Dale of Centralia; and many aunts, uncles, nieces, nephews, great nieces, and great nephews. Neil was preceded in death by his grandparents: Irvin and Mary Haake and Henry and Selma Maschhoff; and his in-laws: Gene and Wannita Eversgerd. Neil's title may have been farmer, but it was also his passion. He was a member of the Illinois Farm Bureau. He was on the Hoyleton Rural Water District Board and the Irvington Township Board. He was also a member of the Trinity Lutheran Church of Centralia. He will be dearly missed by his family and everyone who knew him. Funeral services for Neil Haake will be held on Tuesday, September 28, 2021 at 10:00 am at the Trinity Lutheran Church of Centralia with Pastor Miguel Torniere officiating. Burial will follow at the Trinity Lutheran Cemetery in Hoyleton. Visitation will be held from 5:00 pm to 7:00 pm on Monday, September 27, 2021 at the Sutherland-Garnier Funeral Home in Centralia. In lieu of flowers, memorial donations can be made to Christ Our Rock Lutheran High School or donor's choice and will be accepted at Sutherland-Garnier Funeral Home at 235 North Sycamore Street in Centralia, IL 62801 (618) 532-3523, who is honored to be of service to the Haake family. Online condolences may be made to the family by visiting www.sutherlandfuneralhome.com or the Funeral Home's Facebook page.

The family of Neil Haake created this Life Tributes page to make it easy to share your memories.

Send flowers to the Haake family.