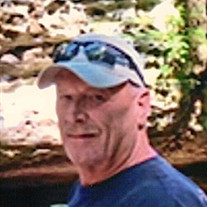 Michael L. Swift, 61, of Odin, IL passed away July 24, 2020 while working in Beaumont, TX. Born November 15, 1958 in Salem, IL, he was the son of Paul Leroy and Roberta (Cooper) Swift. Michael retired in 2000 after 23 years service with the Illinois State Police. He was presently working as a safety supervisor for Cust-O-Fab. He was a Master Mason, and originally a member of the Kinmundy Masonic Lodge. He married Sharon L. Benefield, March 9, 2013 in Pasadena, TX and she survives in Odin, along with his son Zach Swift of Murphysboro, IL and stepdaughter Jessica Swenn of Amarillo, TX. Also, grandchildren Liam and Sean Swift of Murphysboro, and Jackson, Claire and Houston Swenn of Amarillo. Also left to mourn his passing is his mother, Roberta Swift of Kinmundy, and sisters Colleen (John) Miselbrook of Kinmundy, and Carmen (Kim) Grandt of Florence, KY. Funeral services will be at 1:00 p.m., Saturday at the Kinmundy Christian Church, Kinmundy, IL with Josh Conley officiating. Burial will follow at the Sandy Branch Cemetery, Alma, IL. Visiting hours will be from 10:00 a.m. until the service hour at the church. Due to recent health concerns, it is suggested that those attending services respectfully observe suggested health precautions and social distancing. For those wishing to make memorials honoring Michael's memory, the family suggest you consider Tunnel 2 Towers at tunnel2towers.org, and will be received by the Sutherland - Rankin Funeral Home, 310 N. Broadway, P.O. Box 97, Salem, IL, (618) 548-1234, entrusted with the family's care. On line expressions of sympathy may be left at sutherlandfuneralhome.com.

The family of Mr. Michael L. Swift created this Life Tributes page to make it easy to share your memories.

Send flowers to the Swift family.