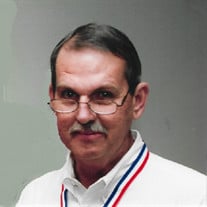 Mike Steinmann, 68, of Centralia, passed away Saturday, January 9, 2021 at Aperion Care in Fairfield, Illinois, after a lengthy illness. He was born April 26, 1952 in Centralia, the son of H. Dwight Steinmann and Mary (Barvid) Steinmann. He married Rebecca Richardson, they had two children together: Michael D. and Cori, and they later divorced. Mike married Kathy Barksdale on October 27, 1995 and she preceded him in death on December 8, 2020. In addition to his two children: Michael D. Steinmann and Cori Kent, Mike is also survived by his stepdaughter: Rachel Barksdale and Matt Morton of Kell; his sister: Pat Pracht and husband Dennis of Centralia; a nephew: Alex Pracht of Centralia, a niece: Suzy Ganey and husband Brian of Springfield, and several great-nieces and great-nephews. Mike was preceded in death by his parents, wife, aunts, and uncles. Mike was a graduate of the Centralia High School Class of 1969. He played Orphan Football and his team was known as the “Wild Bunch”. Mike was inducted into the Centralia High School Sports Hall of Fame. He graduated from ISU with his Bachelor Degree in physical education. For many years he was a P.E. Teacher, Drivers Education Teacher, Coach, and Referee for the Carbondale, Cairo and Centralia area. Mike was an avid Centralia Orphan’s Fan and attended many games. Mike was an avid golfer and he enjoyed watching Westerns on TV. He was a member of St. Mary Church in Centralia. Per Mike’s wishes, cremation rites will be accorded and a Private Family Service will be held at a later date. In lieu of flowers, memorial donations may be made to Band Aide or the CHS Booster Club and will be accepted at the Sutherland-Garnier Funeral Home and Cremation Services at 235 North Sycamore Street Centralia, Illinois 62801, (618)532-3523, who is honored to be of service to Mike’s Family. Online condolences may be made to the family by visiting www.sutherlandfunerlahome.com and the Sutherland-Garnier Funeral Home Facebook Page.

Mike Steinmann, 68, of Centralia, passed away Saturday, January 9, 2021 at Aperion Care in Fairfield, Illinois, after a lengthy illness. He was born April 26, 1952 in Centralia, the son of H. Dwight Steinmann and Mary (Barvid) Steinmann. He... View Obituary & Service Information

The family of Michael F. Steinmann created this Life Tributes page to make it easy to share your memories.

Send flowers to the Steinmann family.