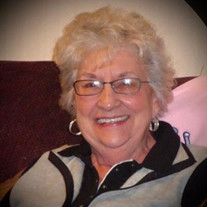 Melva Turner, 89, of Centralia, passed away Sunday, July 12, 2020 at Centralia Fireside Nursing Home. She was born January 1, 1931 in Centralia, the daughter of Roy Garland and Mae (Ledbetter) Garland. She married J. Hamon Hart and they later divorced. She married J.D. Turner on November 1, 1976 and he preceded her in death on December 17, 2004. Melva is survived by her son, TJ Hart and wife Cindy of Terre Haute, Indiana; a step son: Dennis Turner and wife Sharon of Sikeston, Missouri; 7 grandchildren and 12 great-grandchildren; several nieces and nephews. She was preceded in death by her parents: Roy and Mae Garland, husband: J.D. Turner, a daughter: Becky Hart a grandson: Jay Jolliff, four brothers: Joe Garland, Tom Garland, Bill Garland, and Roy Garland; five sisters: Dorothy White, Mary Garland, Opal Spencer, Harriet Sessions and Maxine Yauch. Melva and her first husband, Hamon owned and operated two grocery stores in Centralia and Wamac for years. She enjoyed fishing, gardening, playing poker and slot machines. She was a member of the Central City Lioness for several years. Melva cherished the time she spent with her family and friends. The family of Melva would like to share a poem that was dear to her. Give Now – “I would rather have one little rose from the garden of a friend, than to have the choicest flowers when my stay on earth must end. I would rather have one pleasant word in kindness said to me than flattery when my heart is still, and life has ceased to be. I would rather have a loving smile from friends I know are true than tears shed’ round my casket when this world I bid adieu. Blossoms bring to me today, Whether pink or white or red; I’d rather have one blossom now than a truckload when I’m dead.” – Author unknown Per Melva’s wishes, cremation rites will be accorded, and no public services will be held. In Honor of Melva, memorial donations may be made to the Central City Lioness and will be accepted at the Sutherland-Garnier Funeral Home at 235 North Sycamore Street Centralia, Illinois 62801, (618)532-3523, who is honored to be of service to the Turner Family. Online condolences may be made to the family by visiting www.sutherlandfuneralhome.com

Melva Turner, 89, of Centralia, passed away Sunday, July 12, 2020 at Centralia Fireside Nursing Home. She was born January 1, 1931 in Centralia, the daughter of Roy Garland and Mae (Ledbetter) Garland. She married J. Hamon Hart and they later... View Obituary & Service Information

The family of Melva Turner created this Life Tributes page to make it easy to share your memories.

Send flowers to the Turner family.