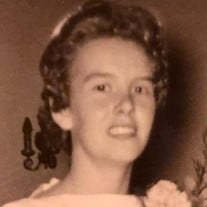 Mary Anna Nollman, of Centralia, passed away peacefully, at Odin Healthcare Center, on Saturday, January 29, 2022, two days after her 86th birthday. Mary was born January 27, 1936 in Pinckneyville, Illinois to parents, William "Bill" Minton and Ruth Lueker Minton. She married the love of her life, Larry Ray Nollman on October 6, 1956, at Faith Methodist Church in Wamac, Illinois and he preceded in her in death on October 6, 2008. Mary and Larry were members of of the Faith Methodist Church in Wamac, with Larry's cousins: Dale Bushong and Mary's best friend: Shirley Holmes Jenkins, serving as witnesses. Mary was an accountant working for Thomas "Addie" Wiggs, then the accounting firm of Wiggs, Smallwood and Scheriger and last but certainly not least, she retired from the Geary-Cooksey Agency. Mary was an avid bowler earlier in her life, then she later on took up the frustrating game of golf. She was always attempting, but never quite accomplished, beating her brothers in a game of golf. Mary is survived by a daughter: Laura Nollman, granddaughter: Mary Melisa Gormann and husband T.J., a great-grandson: Cade James Gormann and a great-granddaughter: Gracey Sue Gormann, all of Centralia; Also surviving are her two brothers: Sam Minton and AL "Monti" Minton both of Centralia; her baby sister: Ruth Alice Younker and husband John of Mt. Zion, Illinois; several nieces and nephews: Jeff (Dana) Minton, Terry (Pam) Minton, Jenny (Mike) Copple, Danny (Laura) Nollman, Jerry (Glenda) Nollman, and Cindy (Steve) Weatherford. She was preceded in death by her parents, husband, father and mother-in-law: Fred "Fritz" and Floy Williamson Nollman, sisters-in-law: Judy Minton and Kilani Minton, a nephew: William Kalani Minton, and brothers-in-law and sisters-in-law: Ken and Lorene Nollman and Bob and Billie Nollman. No Public Services will be held at this time, due to the never-ending pandemic. There will be a Private Family Service held at a later date, with Mary's nephew, Jeff Minton officiating. In lieu of flowers, memorial donations may be made to Laura Nollman for Mary's great-grandchildren (Cade & Gracey) educational fund and will be accepted at the Sutherland-Garnier Funeral Home at 235 North Sycamore Street Centralia, Illinois 62801, (618)532-3523, who is honored to be of service to the Nollman Family. Online condolences may be made to the family by visiting www.sutherlandfuneralhome.com and the Sutherland-Garnier Funeral Home Facebook Page.

The family of Mary Nollman created this Life Tributes page to make it easy to share your memories.

Mary Anna Nollman, of Centralia, passed away peacefully, at Odin...

Send flowers to the Nollman family.