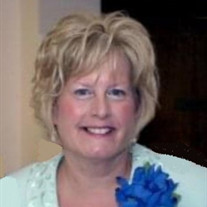 Mary “Mimi” Rapp, 65, of Irvington, passed away at her home on Sunday, January 2, 2022. She was born February 22, 1956 in Carlyle, the daughter of Dr. James Platt and Jean (Frerker) Platt. She married Philip Rapp on October 16, 1981 and he survives in Irvington. In addition to her husband of 40 years, Philip Rapp of Irvington, she is also survived by her three children: Kerry Honerkamp and husband Michael of Centralia, Kelly Rapp of Centralia, and Philip Rapp, Jr. of Centralia; four grandchildren: Morgan, Quinn, Zander and Zyler; a brother: Bill Platt and wife Dianne of Tulsa, OK; two sisters: Missy Holtgrave and husband Steve of Carlyle and Caroline “Gigi” Platt of Irvington; brother-in-law: Richard Rapp and wife Melinda of Fairview Heights; two sisters-in-law: Nancy Rapp of Centralia and Kathy Rapp of Centralia; several nieces and nephews; and numerous friends. She was preceded in death by her parents, two brothers: James “Tapper” Platt and Paul Platt, father and mother-in-law: Clifford and Mary Rapp, a brother-in-law: David Rapp, and maternal grandparents Paul and Leona (Heyer) Frerker. Mimi graduated from Carlyle High School and also graduated from Eastern with her Bachelors Degree in Social Work. Mimi worked for the Hoyleton Children's Home before becoming a social worker for the State of Illinois where she served many children, families, and daycare centers in various capacities including case work, investigation, and licensing. Mimi enjoyed attending and volunteering for several local Humane Society activities. She was so proud of her children, and especially enjoyed spending time with her grandchildren who lovingly called her “Mammo”. All those who were friends of Mimi’s knew of her love for English bulldogs and love to recall her moments of kindness and humor in her professional and family life. Mimi was a member of St. Mary’s Catholic Church in Centralia. A Memorial Service for Mary “Mimi” Rapp will be held Friday, January 7, 2022 at 6:00 PM at the Sutherland-Garnier Funeral Home in Centralia with Father Steven Pautler officiating. Visitation will be held Friday evening from 4:00 PM to 6:00 PM at the funeral home. In lieu of flowers, memorial donations may be made to the Centralia Humane Society and will be accepted at the Sutherland-Garnier Funeral Home at 235 North Sycamore Street Centralia, Illinois 62801, (618) 532-3523, which is honored to be of service to the Rapp Family. Online condolences may be made to the family by visiting www.sutherlandfuneralhome.com and the Sutherland-Garnier Funeral Home Facebook Page.

The family of Mary "Mimi" Rapp created this Life Tributes page to make it easy to share your memories.

Send flowers to the Rapp family.