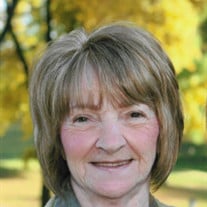 Marilyn Wernsman, 84, of Centralia, passed away Thursday, October 21, 2021 at Centralia Manor. Marilyn was born April 9, 1937 in Centralia, the daughter of Harvey Watson and Gladys (Queen) Watson. She married Charles Wernsman on December 1, 1954 and he preceded her in death on December 5, 2002. Marilyn is survived by her five children: Terri Wilson and husband John of Benton, Sue Castleman of Centralia, Brian Wernsman and wife Misty of Centralia, Melissa Knolhoff and husband Kurt of Centralia, and Scott Wernsman and wife Tammy of Carterville; eleven grandchildren; Matt Castleman and wife Monica, Ryan Castleman and wife Annie, Jamie Robertson and husband Steve, Jennifer Coleman, Jessica Gunsaulus and husband Calvin, Jonathon Wilson, Rachael Wernsman, Alexis Wernsman, Madeline Wernsman, Reece Knolhoff and Blaike Knolhoff, sixteen great-grandchildren; two brothers: Gene Watson of South Carolina and Monty Watson and wife Diane of Florida; sister in law: Ruby Watson of Salem, several nieces, nephews, great-nieces, and great-nephews. Marilyn was preceded in death by her parents Harvey and Gladys Watson, her husband Charles Wernsman, and three brothers: Jerry Watson, Roger Watson, and Dwayne Watson. Marilyn enjoyed playing cards. When her children were young she enjoyed camping with her family. She also enjoyed taking care of her kids and grandkids. She deeply loved her family and will be dearly missed by them. Funeral services for Marilyn Wernsman will be held on Monday, October 25, 2021 at 1:00 p.m. at the Sutherland-Garnier Funeral Home in Centralia. Burial will follow at Hillcrest Memorial Park. Visitation will be held Monday, October 25, 2021 from 11:00 a.m. till 1:00 p.m. at the funeral home. Memorial donations can be made to: City Hope Missions, Greenview Christian Church Missions, or the Centralia Humane Society and will be accepted at Sutherland-Garnier Funeral at 235 North Sycamore Street in Centralia, Illinois 62801 (618) 532-3523, who is honored to be of service to the Wernsman family. Online condolences may be made to the family by visiting www.sutherlandfuneralhome.com or the Funeral Home’s Facebook page.

The family of Marilyn Wernsman created this Life Tributes page to make it easy to share your memories.

Send flowers to the Wernsman family.