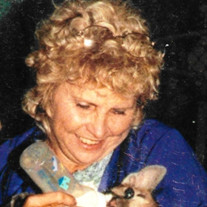 Marguerite Hays, 77, of Centralia, passed away Wednesday, October 14, 2020 at SSM Health St. Mary's Hospital in Centralia. She was born August 29, 1943 in Teaneck, New Jersey, the daughter of Eugene Simanek and Margaret (Osthiemer) Simanek. She married Ronald Hays on December 26, 1999 and he survives in Centralia. In addition to her husband of 21 years, Ronald Hays of Centralia, she is also survived by four sons: Michael Haberman and wife Vickie of New Jersey, Jason Haberman and wife Rebecca of Memphis, Tennessee, Peter Helff of New York, and John Paul "Rusty" Helff of Naples, Florida; two step children: Kimberly Holsapple and Brian Hays, both of Centralia; six grandchildren, five step grandchildren, and four step great-grandchildren; two brothers: John Simanek and partner of the Florida Keys and Gene Simanek and wife Nancy of Indianapolis, Indiana; several nieces and nephews. She was preceded in death by her parents, a daughter: Suzanne Helff and her father and mother-in-law: Donald and Mary Hays. Marguerite was an artist and loved animals. She started volunteering at American Heritage Wildlife in Naples, Florida and then later after moving to Centralia she started the DASH Animal Rescue. She also enjoyed going to garage sales and shopping. Marguerite cherished the time she spent with her family and friends. Per Marguerite's wishes, cremation rites will be accorded and a Private Celebration of Life Service will be held at a later date. In lieu of flowers, memorial donations may be made to the DASH Animal Rescue and will be accepted at the Sutherland-Garnier Funeral Home at 235 North Sycamore Street Centralia, Illinois 62801, (618)532-3523, who is honored to be of service to the Hays Family. Online condolences may be made to the family by visiting www.sutherlandfuneralhome.com and the Sutherland-Garnier Funeral Home Facebook Page.

The family of Marguerite Hays created this Life Tributes page to make it easy to share your memories.

Send flowers to the Hays family.