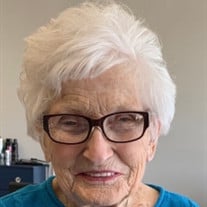 Marceline Eleanor Bassett, 96, of Athens, Alabama passed away June 14, 2022 at Limestone Health Facility, Athens. She was born in Oskaloosa, Illinois, daughter of George Albert and Minnie Louise (Sporleder) Fulfer on August 21, 1925. She united in marriage with Robert Dale Bassett, February 13, 1943 in St. Louis, MO. Mrs. Bassett is survived by a son, Stephen Bassett of Westport, KY; a daughter, Barbara Ash and husband Harold of Athens, AL; four grandchildren; nine great-grandchildren; and six great-great-grandchildren. She was preceded in death by her parents, her husband, a son Gary Basset and wife Bonnie Bassett, one brother, Robert, two half-brothers, and one half-sister. Mrs. Bassett was a retired homemaker. She also worked many years as a care giver. She was a member of the Church of Christ and attended the last few years at Market Street church in Athens. AL. Funeral services will be 1:00 pm Saturday, June 25, 2022 in the chapel of Sutherland - Rankin Funeral Home, P.O. Box 97, 310 N. Broadway, Salem, IL 62881 (618) 548-1234, entrusted with the family's care. Burial will follow at the Oskaloosa Cemetery. Visiting hours will be from 11:00 am until the service hour Memorials may be made to the charity of Donor's choice and will be accepted by the funeral home. On line condolence may left at sutherlandfuneralhome.com.

The family of Marceline Bassett created this Life Tributes page to make it easy to share your memories.

Send flowers to the Bassett family.