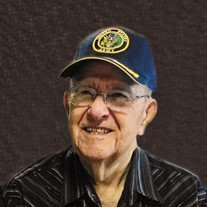 MAJ (RET) Leland R. "Bud" "Sarge" Whalen, 93, of Centralia, passed away Wednesday, June 2, 2021 at SSM Health St. Mary's Hospital in Centralia. Leland was born November 5, 1927 in Grand Rivers, KY, the son of Joseph Whalen and Birdie (Doom) Whalen. He married Jewel Holaday on November 24, 1948 in Salem, IL, and she survives him in Centralia. In addition to his loving wife Jewel of 72 years, Leland is survived by two sons: Lamar Whalen and wife Annette of Odin, and Michael Whalen I of Sandoval; one daughter: Arleen Timmons and husband John of Centralia; grandchildren: Christina Parker and husband Robert of Salem, IL, Tara Adams and husband Chad of East Peoria, IL, and Michael Whalen II and wife Stephanie of Centralia; great grandchildren: Zachary Whalen of Centralia, Ashley Romero and husband Ross of Warrensburg, Mo, Abigail Soddy of Laramie, WY, and Ellie Adams of East Peoria, IL; great-great grandchildren: Avery Whalen and Jensen Whalen; special friends: Major Edward and Margaret Jarvis. Leland was preceded in death by his parents: Joseph and Birdie Whalen; brothers: Ollie Whalen, Lester Whalen, Willard Whalen, Elvis Whalen, George Whalen, and Raleigh Bennett Whalen; sister: Mary Hawkins; sisters-in-law: Nettie Whalen, Josie Whalen, Pearl Whalen, and Reba Whalen; brother-in-law: Alfred Hawkins; and son-in-law: Pete Wamble. When Leland was 18 years old in 1945, he joined the Illinois Reserve Malitia when he graduated from Sandoval High School. In 1946, he joined the U.S. Army and went to Fort Jackson, South Carolina for basic training. He served at Camp Schimmelpfennig in Sendai , Japan in the 188th Parachute Regiment. When he returned from Japan he joined the National Guard. In 1952, he was sent to Naha, Okinawa and when returning to the U.S. he stayed in the National Guard. He was Company Commander at Centralia, Salem, and Mt. Vernon. He attended military educational classes in several places, including Coronado, CA, Richmond, VA, and University of Southern Mississippi in Hattiesburg, MS, and U.S. Army Command and General Staff College of Fort Leavenworth, KS. Leland retired as Major after 42 years. He was a former member of Hickory Street Christian Church. He was a Special Deputy in Clinton County, Cub Scout leader, and Round Table Commissioner. Leland worked for 36 years at Illinois Central Railroad as a supervisor for the mechanical department at the IC Railroad car shops in Centralia. He was a Senior Judge for the Antique Automobile Club of America for 40 years. He was known for being one of the original Charter Members of Freedom Riders A.B.A.T.E.. He was also previously a member of the Centralia V.F.W. Post 2055 and the American Legion Post 446. Graveside Services for Leland Whalen will be held Tuesday, June 15, 2021 at 2:00 p.m. at Hillcrest Memorial Park in Centralia with Major Edward Jarvis officiating. Military honors will be accorded at the grave by the American Legion Post 446 and the V.F.W. Post 2055. In lieu of flowers, memorial donations may be made to the American Heart Association and will be accepted by the Sutherland-Garnier Funeral Home at 235 North Sycamore Street in Centralia, IL 62801 (618) 532-3523, who is honored to be of service to the Whalen family. Online condolences may be made to the family by visiting www.sutherlandfuneralhome.com or the Funeral Home's Facebook page.

The family of MAJ (RET) Leland R. "Bud" "Sarge" Whalen created this Life Tributes page to make it easy to share your memories.

Send flowers to the Whalen family.