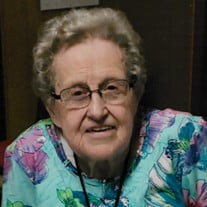 Lucille E. Knolhoff, 91, of Hoffman, passed away Tuesday, March 23, 2021 at her home, surrounded by her family. She was born September 6, 1929 in Hoffman, the daughter of Martin Holle and Emily (Hussmann) Holle. Lucille married Norman Knolhoff on September 5, 1948 and he preceded her in death on November 29, 2019. Lucille is survived by a daughter: Marsha Abernathy and husband Dennis of Hoffman; a daughter-in-law: Beth Knolhoff of Centralia; three grandchildren: Michael Abernathy wife Kathy of Hoffman, Teresa Haake and husband Denny of Hoffman, and Ciera Peck and husband Ryan of Centralia; four great-grandchildren: Macey Smith of Hoffman, Madeline Haake of Hoffman, Evan Abernathy of Hoffman and Jaxon Peck of Centralia; two sisters-in-law: Bernice Knolhoff and Lucille Knolhoff; and several nieces and nephews. She was preceded in death by her parents, husband: Norman Knolhoff, two sons: Kevin Knolhoff and Dale Knolhoff, a brother: Milton Holle and a sister: Florence Stein. Lucille was a homemaker and helped on the family farm. She was a member of the Trinity Lutheran Church in Hoffman and she was very strong in her faith. Lucille cherished the time she spent with her children, grandchildren, family and friends. Funeral Services for Lucille E. Knolhoff will be held Friday, March 26, 2021 at 11:00 AM at the Trinity Lutheran Church in Hoffman with Pastor Mark Hofferber officiating. Burial will follow at the Trinity Lutheran Church Cemetery in Hoffman. A visitation will be held from 10:00 AM until the time of service on Friday morning at the church. In lieu of flowers, memorial donations may be made to the Trinity Lutheran Church in Hoffman and Christ Our Rock Lutheran High School and will be accepted at the Sutherland-Garnier Funeral Home at 235 North Sycamore Street Centralia, Illinois 62801, (618)532-3523, who is honored to be of service to the Knolhoff Family. Online condolences may be made to the family by visiting www.sutherlandfuneralhome.com and the Sutherland-Garnier Funeral Home Facebook Page.

Lucille E. Knolhoff, 91, of Hoffman, passed away Tuesday, March 23, 2021 at her home, surrounded by her family. She was born September 6, 1929 in Hoffman, the daughter of Martin Holle and Emily (Hussmann) Holle. Lucille married Norman Knolhoff... View Obituary & Service Information

The family of Lucille E. Knolhoff created this Life Tributes page to make it easy to share your memories.

Send flowers to the Knolhoff family.