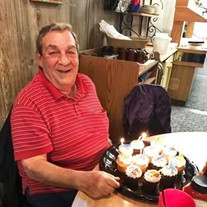 Louis "Lou" R. Logullo, 76, of Centralia, passed away Saturday, March 6, 2021. He was born on December 12, 1944 in Chicago, the son of Louis Logullo and Helen (Fillippo) Logullo. He married Sherry Helpingstine Pierceall on July 16, 1988 and she preceded him in death on February 10, 2015. Lou is survived by six daughters: Tracy (Logullo) Francois and husband Joe of Centralia, Jayme (Logullo) Alcorn and husband Brooks of Centralia, Jennifer (Pierceall) Herman and husband Jerry of Co., Sara (Pierceall) Barton and husband Dan of Belleville, and Emily ( Pierceall) Mach and husband Ross of Ne., a son-in-law: Terry Miller of Tx., 16 grandchildren: Audra, Ameila, and Carter Herman, Gabrielle and Isabelle Barton, Brady and Bennett Mach, Ashley, Abigail, and Zach Miller, Lillian and Madison Francois, Savana Hartnell, Peyton, Camden, and Emily Alcorn; four great-grandchildren; a brother: Bob Logullo and wife Barbara of Centralia; a brother-in-law: Orland Bauer of Centralia; several nieces and nephews; and special friends: Ron and Helen Donoho, Bob and Patti Hahn, and many close friends. Lou was preceded in death by his parents: Louis and Helen Logullo, wife: Sherry Logullo, a daughter: Monica (Logullo) Miller, and a sister: Linda Bauer. Lou served in the U.S. Navy on the submarine USS Benjamin Franklin. He proudly shared his naval reunions with his family. He was a member of the Centralia American Legion Post 446, the Centralia Elks and St. Mary Catholic Church in Centralia. Lou enjoyed playing golf with his buddies and even watching golf tournaments on T.V. If you were to stop by the Caddy Shack or Poplar Place, you would find Lou there having a good time with his friends. Lou loved his daughters, grandchildren, family and friends. He will be greatly missed. A Private Mass of Christian Burial will be held Wednesday, March 10, 2021 at St. Mary Catholic Church in Centralia with Monsignor David Darin and Father Steven Pautler officiating. Burial will follow at the Calvary Cemetery in Centralia. For those who would like to view the Mass live, please visit St. Mary Church Facebook Page at 11:00 AM. A Visitation will be held Wednesday morning from 10:00 AM until the time of Mass. Anyone who attends the visitation at the church will be required to wear a mask and social distance. A Visitation will be held Tuesday, March 9, 2021 from 4:00 PM to 7:00 PM at the Sutherland-Garnier Funeral Home in Centralia. Due to the health guidelines, masks must be worn; social distancing will take place, and a limit of 50 attendees at a time for the visitation at the funeral home. In lieu of flowers, memorial donations may be made to the St. Mary School and the Centralia American Legion Post 446 and will be accepted at the Sutherland-Garnier Funeral Home at 235 North Sycamore Street Centralia, Illinois 62801, (618)532-3523, who is honored to be of service to the Logullo Family. Online condolences may be made to the family by visiting www.sutherlandfuneralhome.com and the Sutherland-Garnier Funeral Home Facebook Page.

Louis "Lou" R. Logullo, 76, of Centralia, passed away Saturday, March 6, 2021. He was born on December 12, 1944 in Chicago, the son of Louis Logullo and Helen (Fillippo) Logullo. He married Sherry Helpingstine Pierceall on July 16, 1988 and... View Obituary & Service Information

The family of Louis "Lou" Ray Logullo created this Life Tributes page to make it easy to share your memories.

Send flowers to the Logullo family.