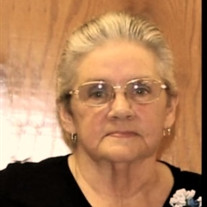 Loretta Fae Smith, 73, of Salem, IL passed away December 9, 2020 at SSM of the Good Samaritan Hospital, Mt. Vernon, IL. She was born October 1, 1947 in Salem to William Q. and Eleanora Fae (Miller) Meadows. Loretta was all about her family. She loved to cook for them and made the very best chicken and dumplings ever according to her children. She love the St. Louis Cardinals, and playing bingo was important to her. She was of the Baptist faith. She was married to Larry A. Easley in 1962 and he preceded her in death in 1983. She then married Morris E. Smith, October 3, 1983 in Missouri and he preceded her in death August 18, 2020. Surviving are her children, Stacey (Debbie French) Easley of Iuka, IL, Randy (Michael Cash) Easley of Centralia, Il. William Joe Easley of Iuka, IL, Lisa (Doug) Grimes of Centralia, IL, Robin (Mindy Recar) Easley of Centralia, IL and Cindy (Randy) Webb of Salem, IL along with several grandchildren, and great grandchildren. Also left to mourn his passing are siblings Billy (Helen) Meadows, Dino Meadow, Genie Cole, Aletta (Clyde) Miracle and Pat (Ron) Arnold all of Salem, IL and several nieces and nephews, along with her mother-in-law, Ruth Johnson and sister-in-law Belle Goodwin both of Herrin. In addition to her husbands and parents, she is preceded in death by a sister Alice Lawson, granddaughter Amber Easley and great grandson Ethaniel "Bean" Smith. Funeral services will be 7:00 p.m. Monday at the Calvary Baptist Church in Salem. Burial will take place at a later date. It is imperative those attending the services wear a face mask, and practice social distancing due to recent health concerns. Visiting hours will be from 5:00 pm until the service hour at the church on Monday at the church. Memorials may be made to the family and will be accepted by the Sutherland - Rankin Funeral Home, 310 N. Broadway P.O. Box 97, Salem, IL 62881 (618) 548-1234, entrusted with the family's care. On line expressions of sympathy may be left at sutherlandfuneralhome.com.

Loretta Fae Smith, 73, of Salem, IL passed away December 9, 2020 at SSM of the Good Samaritan Hospital, Mt. Vernon, IL. She was born October 1, 1947 in Salem to William Q. and Eleanora Fae (Miller) Meadows. Loretta was all about her family.... View Obituary & Service Information

The family of Loretta Smith created this Life Tributes page to make it easy to share your memories.

Send flowers to the Smith family.