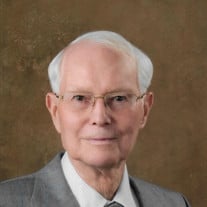 Leonard Dale Barth, 99, of Centralia, passed away Monday, February 8, 2021 at his home. He was born June 10, 1921 in Paris, Illinois, the son of Leonard Barth and Gertrude (Schlosser) Barth. He married Lillian Eldredge in Paris, Illinois on August 29, 1942 and she preceded him in death on December 4, 2018. Leonard is survived by his son, Norman Barth of Centralia; a grandson: Bryan Barth and wife Carrie of Anchorage, Alaska; two great-grandsons: Colby Barth of Orange City, Florida and Takker Barth of Anchorage, Alaska; and several nieces and nephews. He was preceded in death by his parents: Leonard and Gertrude Barth, wife: Lillian Barth, son: Robert "Bob" Barth, two sisters and a brother. Leonard served in the U.S. Navy during World War II. He worked for the railroad and also at Warren G. Murray Center in Centralia for many years. He was an avid motorcycle enthusiast. Leonard was a loving husband, father and grandfather. Due to the recent weather conditions, the Graveside Service for Leonard Barth has been rescheduled for Monday, February 22, 2021 at 12:01 PM at Hillcrest Memorial Park in Centralia with Pastor Steve Upchurch officiating. Military Honors will be accorded at the gravesite by the Centralia American Legion Post 446 and the Centralia V.F.W. Post 2055. In lieu of flowers, memorial donations may be made to Shriner's Children's Hospital and will be accepted by the Sutherland-Garnier Funeral Home at 235 North Sycamore Street in Centralia, IL 62801 (618) 532-3523, who is honored to be of service to the Barth family. Online condolences may be made to the family by visiting www.sutherlandfuneralhome.com or the Funeral Home's Facebook page.

Leonard Dale Barth, 99, of Centralia, passed away Monday, February 8, 2021 at his home. He was born June 10, 1921 in Paris, Illinois, the son of Leonard Barth and Gertrude (Schlosser) Barth. He married Lillian Eldredge in Paris, Illinois... View Obituary & Service Information

The family of Leonard Dale Barth created this Life Tributes page to make it easy to share your memories.

Send flowers to the Barth family.