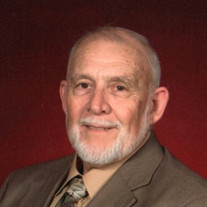 Larry L. Dodd, 76, of Salem, Illinois passed away Thursday at his home in the care of his loving family. Born March 8, 1945 in Harrison, Arkansas, he was the son of Murl and Faye (Pyle) Dodd. Larry retired with 36 years of service on the United Pacific Railroad. He faithfully served in the Union State Army (1964-1970) with the 2nd. and 5th. artilleries in the 7th Army Division-Germany. He was a devoted member of First Baptist Church in Salem, serving on many committees throughout the years, and presently as a Trustee, and developed the Church Security Team. He was also active on the numerous church mission activities, including the Haiti Mission trips, the Mission Salem team, Campers on Mission and the Disaster Relief team. Personally, he was an avid fisherman and hunter organizing spring fishing trips to Kentucky and Truman Lake, and many fall hunting expeditions. He married Debra Guymon April 20, 1998 and she survives in Salem, along with his children Tammy (Keith) Maloy of Poplar Bluff, MO, Greg Dodd of Poplar Bluff, MO, Kim Beck of Potosi, MO, Kelly (Chuck) Wood, Salem, IL and Deric Rice of Salem, IL, along with grandchildren Brad (Misty) Andrews of Poplar Bluff, MO, Ryan (Jennifer) Andrews of St. Charles, MO, Shana Maloy of Doniphan, MO, Jessica (Jason) Longihebler of Poplar Bluff, MO, Stacey (Jason) White of Poplar Bluff, MO, Camren Muse, Christian Muse and Elizabeth Lee all of Potosi, MO, Ashley Bachman of Salem, IL and Zach Bachman of Princeton, IN. Also a very special great granddaughter Braylee Bachman, his "Little Red Head Tornado" of Princeton, IN, along with several other great grandchildren. Also left to mourn his passing is his dear mother, Faye Wood of Salem, IL and a very dear best friend, Terry "Buckwheat" Mahurin of Arkansas. In addition to his father, he is preceded in death by a daughter-in-law, Kristen Dodd in May of 2021. Funeral services are scheduled for 2:30 pm, Sunday at the First Baptist Church in Salem with Dr. Andy DeWitt officiating. Burial will follow at the Paradise Cemetery in Salem with full military honors accorded by the Salem American Legion Post #128. Visiting hours will be from 1:00 pm until the service hour at the church. The family suggest those making a memorial donation consider the First Baptist Church in Salem, or Mission Salem, accepted by the Sutherland - Rankin Funeral Home, 310 N. Broadway, P.O. Box 97, Salem, IL 62881, entrusted with the family's care.

Larry L. Dodd, 76, of Salem, Illinois passed away Thursday at his home in the care of his loving family. Born March 8, 1945 in Harrison, Arkansas, he was the son of Murl and Faye (Pyle) Dodd. Larry retired with 36 years of service on the... View Obituary & Service Information

The family of Larry L Dodd created this Life Tributes page to make it easy to share your memories.

Larry L. Dodd, 76, of Salem, Illinois passed away Thursday at...

Send flowers to the Dodd family.