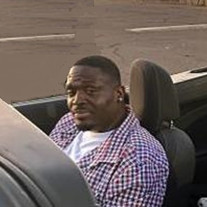 Khaleem Jones, 35, of Phoenix, Arizona, passed away, Wednesday, February 10, 2021 at Deaconess Midtown Hospital in Evansville, Indiana. He was born October 26, 1985 in Centralia, the son of Johnnie Ray Jones and Mildred Burns. In addition to his mother, Mildred Burns of Phoenix, Arizona, he is also survived by his grandmother: Ophella Jeter of Centralia; three brothers: Marcus Jones and wife Teresa of Phoenix, Arizona, Johnnie Jones of Centralia, and Donte Jones of Phoenix, Arizona; four sisters: Keymia Jones of Glendale, Arizona, Alisha Jones of Houston, Texas, Bianca Jones- Pinon and husband Servando of Phoenix, Arizona, and Louizer Stuckey and husband Caperio of Desert Hot Springs, California; four nephews Jalen Jones, Kamarion Bell, and Jaden Jones and Caperio Stuckey III and one niece Kearra Perryman; a host aunts, uncles and cousins. Khaleem was preceded in death by his father, two brothers: Anthony Ray Jones and Stephon Jones, and grandparents: Johnnie Henry Jones, Bennie Ruth Crisp, and Roosevelt Burns. Khaleem graduated from Independence High School and some college at Glendale Community. Khaleem worked for the family business Jones Janitorial, LLC, up until his death. He enjoyed playing basketball with his nephew, cooking, drawing, and being around family and speaking knowledge into those around him. A Celebration of Life Service for Khaleem Jones will be held Sunday, February 21, 2021 at 2:00 PM at the Sutherland-Garnier Funeral Home in Centralia with Elder Joseph Burns and Pastor Jason Bryant officiating. Visitation will be held from 12:00 PM to 2:00 PM at the funeral home. Due to the health guidelines, masks must be worn and observe social distancing with a maximum of 50 people allowed in the funeral home. In lieu of flowers, memorial donations may be made to Mildred Burns and will be accepted at the Sutherland-Garnier Funeral Home and Cremation Services at 235 North Sycamore Street Centralia, Illinois 62801, (618)532-3523, who is honored to be of service to the Jones Family. Online condolences may be made to the family by visiting www.sutherlandfuneralhome.com and the Sutherland-Garnier Funeral Home Facebook Page.

Khaleem Jones, 35, of Phoenix, Arizona, passed away, Wednesday, February 10, 2021 at Deaconess Midtown Hospital in Evansville, Indiana. He was born October 26, 1985 in Centralia, the son of Johnnie Ray Jones and Mildred Burns. In addition to... View Obituary & Service Information

The family of Khaleem Jones created this Life Tributes page to make it easy to share your memories.