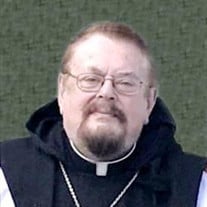 Rev. Fr. Kenneth Anatoly Siefert, 83, of Centralia, passed away Thursday, July 1, 2021 at SSM Health St. Mary Hospital in Centralia, Illinois. He was born July 19, 1937 in Kankakee, Illinois, the son of William Leo Siefert and Lucille (Rivard) Siefert. He married his College Sweetheart, Cynthia Eng in San Diego, California, in August of 1976. She passed away in 2009. She was the daughter of Professor and Mrs. William Eng of Champaign, Illinois. He is survived by his sister: Joanne (Siefert) Riberdy of Kankakee and his brother: Mark Edward Siefert and wife Deborah of Terre Haute, Indiana. He is also survived by his daughter: Kasia Siefert of Belleville, two grandchildren: Angela and Aric Wheeler of McLeansboro, Illinois, many nieces and nephews, and his caregivers: Sarey Gillere, Montell Fields, Brandy Branch, Pam Balsano, Brenda Ibe, and Brooklynn Carpenter. Father Ken and his wife attended Parkland College, Champaign, IL, Illinois State University in Bloomington-Normal and both did graduate work at the University of California (both in San Diego and Los Angeles). He also graduated from St. Elias School of Orthodox Theology with a Licentiate in Sacred Theology. The Catholic Apostolic Church of Malabar awarded him a Doctorate in 1978. He was an ordained priest of the Eastern Orthodox Church. In 1992 he was elevated to the rank of archpriest. For many years he served as a full time Chaplain and Counselor in hospitals in Massachusetts and Illinois. He retired from St. Elizabeth’s Hospital in Belleville, Illinois on April 2012, after 18 years working as a Chaplain and Substance Abuse Clinician. He moved to Centralia, where he established the Orthodox Christian Center of St. Thomas the Apostle. He was appointed Superior of the Order of St. Thomas the Apostle. While living in Massachusetts he was awarded the prestigious Humanitarian and Social Action Award receiving personal recognition from Governor Dukakis, President Reagan, and Senator John Carey. He served many years in the United States Air Force Auxiliary for 35 plus years and held the rank of Lt. Colonel. He was a friend of Bill W for more than 36 years. Funeral Services for Father Ken Anatoly Siefert will be held Tuesday, July 20, 2021 at 9:00 A.M. at the Sutherland-Garnier Funeral Home in Centralia, Illinois. Visitation will be held Monday, July 19, 2021 from 5:00 PM to 7:00 PM at the funeral home. A Graveside Service will be held Tuesday, July 20, 2021 at 2:00 PM at Mount Hope Cemetery in Champaign, Illinois, where he will be laid to rest next to his wife. In lieu of flowers, memorial donations may be made to the Orthodox Christian Center of St. Thomas the Apostle and will be accepted at the Sutherland-Garnier Funeral Home at 235 North Sycamore Street Centralia, Illinois 62801, (618)532-3523, who is honored to be of service to the Siefert Family. Online condolences may be made to the family by visiting www.sutherlandfuneralhome.com and the Sutherland-Garnier Funeral Home Facebook Page.

The family of Rev. Kenneth Anatoly Siefert created this Life Tributes page to make it easy to share your memories.

Send flowers to the Siefert family.