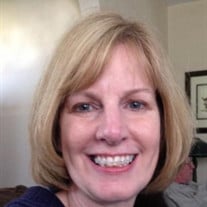 Julie Faye Stover, 62, of Centralia passed away Tuesday, March 29, 2022 at her home. Julie was born November 6, 1959 to Joan Klosterman (Carlson) and Charles Broadhurst. She was a lifelong Centralian. Julie graduated from Centralia High School in 1977. Julie also attended Kaskaskia College. In 1979, Julie was offered a position by Dorothy Mann of Mann & Cummings Oil Company. During her employment, Mann and Cummings was sold to Shell Oil. In 1982, Shell Oil sold its interest to Oil Technology Group. Julie remained with the company during all transitions until 1993. In 1993, Julie accepted the position of office manager with Wood Energy in Mount Vernon. She was employed there for 26 years until her retirement. Julie was recognized for her contributions in the oil and gas industry and she was honored in 2020 by the Illinois Oil & Gas Association as "Petroleum Professional Woman of the Year". She was a former member of Desk and Derrick. She was of the Lutheran Faith. Her personal life revolved around her family. She was a devoted wife and mother. She loved the beaches in Florida and enjoyed many vacations there. Julie married David Lee Stover on April 22, 1983. They have three children: Laura Lee Stover, Christopher Lee Stover and Aaron Lee Stover. Julie is survived by her husband, David; Children: Laura Stover of Marion, Christopher Stover and wife Cassie, grandson: Abe Michael Stover and baby on the way: Amelia Stover, all of Centralia, and Aaron Stover and wife Janice, Grandson: Noah Stover, granddaughter: Averie Stover, all of La Grange, Kentucky. She is also survived by her mother, Joan Klosterman of Centralia; sisters: Kimberly Broadhurst of Iowa City, Iowa and Jacqueline West and Alan of Centralia; brothers: Michael Broadhurst of Centralia, John Snyder and Christina of Centralia, and Ronald Klosterman II and Christine of Detroit, Michigan; her uncle: Gary Carlson of Centralia and aunt: Nancy Gola and husband Lou of Cincinnati, Ohio, and many nieces, nephews and cousins. She was preceded in death by her father: Charles Broadhurst and father: Ronald Klosterman; maternal grandparents: Ray and Julia Carlson; paternal grandparents: Charles and Maude Faye Broadhurst. Funeral Services for Julie F. Stover will be held at 11:00 am Saturday, April 2, 2022 at Sutherland-Garnier Funeral Home in Centralia with Pastor Curt Reed officiating. Burial will follow at Hillcrest Memorial Park in Centralia. Visiting hours for friends and family will be from 10:00-11:00 am at the Funeral Home on Saturday, April 2, 2022. In lieu of flowers, memorial donations may be made to her grandchildren's college fund and will be accepted at the Sutherland-Garnier Funeral Home at 235 North Sycamore Street Centralia, Illinois 62801, (618)532-3523, who is honored to be of service to the Stover Family. Online condolences may be made to the family by visiting www.sutherlandfuneralhome.com and the Sutherland-Garnier Funeral Home Facebook Page.

The family of Julie Faye Stover created this Life Tributes page to make it easy to share your memories.

Send flowers to the Stover family.