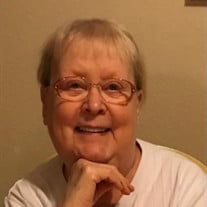 Judy C. Jones, 79, of Hoffman, passed away Thursday, April 14, 2022 at her home surrounded by her family. Judy was born February 8, 1943 in Chicago, the daughter of Victor A. Smith and Ada M. (Hanna) Smith. She married Richard “Dick” Jones on September 24, 1982 and he survives her in Hoffman. In addition to her husband of 39 years, she is survived by four sons: Charles A. West, Jr. and wife Yuki of Delaware, Steven Jones and wife Mimi of Champaign, David C. Jones of Geneseo, and Richard B. Jones, Jr. of Salem; one daughter: Denise R. Summers of Belleville; grandchildren: Dustin White, Justin White, Charles A. West III and wife Heather, Melissa McDonald and husband Sean, Megan Summers, Kate Summers, Hanna Summers, Johnathan West, Wiley Jones, Matthew Jones, Thorin West, Gabriel West, and Brandon West; great grandchildren: Sunnie Edwards, Charles West IV, Kai Tillman, Mila Samson, and Lillian West; brothers: Gene Smith and wife Susie of Centralia, Larry Smith and wife Mary of Walnut Hill; several nieces and nephews. Judy was preceded in death by her parents: Victor and Ada Smith; a daughter: Dana L. West; brothers: Donald Smith and Ronald. Judy’s biggest joy in her life was being a mother, grandmother and great grandmother. She semi retired from Marion County Health Department in 2009. She decided after retirement, she wanted to go back to work part time and retired again in 2016 from the Health Department. Judy will be missed by all who knew and loved her. A Celebration of Life Service for Judy C. Jones will be held at 10:00 a.m. on Wednesday, April 20, 2022 at Zion Hill Missionary Baptist Church in Centralia. Burial will follow in the Zion Hill Cemetery. Visiting hours for friends and family will be held Tuesday, April 19, 2022 from 5:00 p.m. to 7:00 p.m. at Sutherland-Garnier Funeral Home in Centralia. In memory of Judy, memorial donations may be made to the Zion Hill Cemetery Association or to the American Cancer Society and will be accepted by the Sutherland-Garnier Funeral Home at 235 North Sycamore Street in Centralia, Illinois 62801 (618) 532-3523, who is honored to be of service to the Jones family. Online condolences may be made to the family by visiting www.sutherlandfuneralhome.com or the Funeral Home’s Facebook page.

The family of Judy C. Jones created this Life Tributes page to make it easy to share your memories.