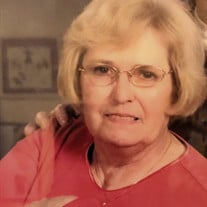 Judy Bartley, 77, of Salem, Illinois passed away December 4, 2020 at Doctors Health and Rehabilitation Center in Salem. Born August 9, 1943 in Salem, she was the daughter of William and Mildred "Pearl" (Thomas) Wright. Judy loved spending time with her family, and enjoyed sewing and quilting as a hobby. She retired from Sherwin Williams. She was a member of Grace United Methodist Church in Salem. She married Clarence A. Bartley, September 10, 1961 in Salem and he preceded her in death November 25, 2014. Surviving are her sons Charles (Melissa) Bartley of Temple, TX, Jeff Bartley (Suzanne) of Salem, IL and Jim (Amy Bivens) Bartley of Odin, along with grandchildren Emily, Jordan, Kristen, Mekenna, Rose and Amber, and several great grandchildren. She is also survived by her siblings, John H. (Marilyn) Wright of Salem, and William (Mary) Wright of Summerset, KY. and several nieces and nephews. In addition to her husband and parents, she was preceded in death by her son Marty Bartley, her daughter-in-law Cindy Warren, brothers Robert M. Wright and Jim Wright, her sister Joyce Gruman, and nephews David and Charles Wright. The family invite you to gather with them at 11:00 am on Tuesday, December 15, 2020 for a celebration of Judy's life with Rev. Rae DeLao officiating. A time of visitation will be from 10:00 am until the service hour at the Sutherland - Rankin Funeral Home, 310 N. Broadway, P O Box 97, Salem, IL entrusted with the family's care. Inurnment will take place at Paradise Cemetery in Salem. Memorials may be made to Judy memory to the family. On line condolences may be left for the family at sutherfuneralhome.com.

The family of Judith L.ynn Bartley created this Life Tributes page to make it easy to share your memories.

Send flowers to the Bartley family.