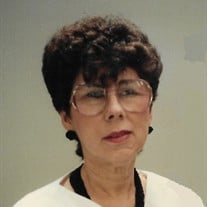 Judith “Judy” Skambraks, 82, of Centralia, passed away peacefully on Thursday, October 8, 2020 in Carlyle Healthcare Center in Carlyle. Judith “Judy” Skambraks was born August 13th, 1938 in East St. Louis, Illinois to Helen Alberta Tottleben Timar. They later divorced and Judy’s mother married Logan Stonecipher of Centralia, Illinois. Judy and her sister Sandra was raised by Mr. Stonecipher. She attended Field Elementary school and graduated in 1956 from Centralia High School. She worked briefly for Illinois Bell Telephone company in Highland Park, Illinois and for several years at the Hollywood Candy Company in Centralia before she married Harold “Dean” Skambraks on December 19th, 1959 at the Glenridge Baptist Church. She lived for four years in Greenville, IL, where her husband taught Industrial Arts and their first child Sherri was the New Year’s baby in 1963. She worked briefly for the Shell Oil Company in Tinley Park, Illinois and their son Jay was born in 1965 at Sliver Cross Hospital in Joliet, Illinois. Moving back to Centralia in 1967, when her husband began teaching at Centralia High School, she began working for the Centralia City School system as a clerk at Franklin School and then as Secretary at the Junior High School until retiring after 25 years of service in 1996. She was very active in the Class of 1956 Reunion Planning Committee for many years. Mrs. Skambraks was over a fifty year member of the Eternity Baptist Church in Centralia, where she assisted with Vacation Bible School and with the youth programs. She was a loving wife, mother, grandmother, sister, and she cherished the time she spent with her family and friends. She is survived by her husband of 60 years Harold “Dean” Skambraks, a daughter, Sherri Skambraks Bailey and her three children: Ethan, Evan and Aubryanna Bailey of Beaver Creek, Ohio and son: Jay Skambraks of Darien, Illinois; two sisters in Centralia, Sandra Jean Sandy, Carol Routt, and one step-sister Louise Strutt of Melbourne, Florida; a sister-in-law, Sandy Skambraks of Florissant, Missouri, four nieces: Deanna Mount, Lori Goin, Anda Skambraks, and Genie Antalek all of Florida; and four nephews David Skambraks of Florida, Mike Skambraks of Missouri, Jeff Skambraks of Missouri, and Joseph R. Chapman of Schamburgh, Illinois. A Private Family Service will be held with entombment to follow at the Hillcrest Lakeside Mausoleum in Centralia. In lieu of flowers, Memorial Donations may be made to the Eternity Baptist Church and will be accepted at the Sutherland-Garnier Funeral Home at 235 North Sycamore Street Centralia, Illinois 62801, (618)532-3523, who is honored to be of service to the Skambraks Family. Online condolences may be made to the family by visiting www.sutherlandfuneralhome.com and the Sutherland-Garnier Funeral Home Facebook Page.

The family of Judith Joan Skambraks created this Life Tributes page to make it easy to share your memories.

Send flowers to the Skambraks family.