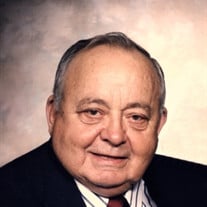 Jimmie A. Warfield, 94, of Salem, Illinois passed away Tuesday, March 16, 2021 at Twin Willow Nursing home in Salem with his daughter by his side. Born February 24, 1927 in Carrier Mills, IL, he was the son of John and Dimple (Rains) Warfield. A very active businessman in Salem, he was President of Warfield Oil Company, and Warfield-Beeson Tire, Inc. After graduating Harrisburg Township High School in 1945, he entered the United State Army, serving in W.W. II. On his return, he met his wife Jean, the love of his life. He started working for First Bank in Mt. Vernon, followed by employment at Gulf Oil Co. In 1954, his Uncle Earl Warfield established Warfield Oil Co. in Salem. In 1957, Earl established Community State Bank, Jimmie, along with Jean bought Warfield Oil Co. and moved to Salem, living there until his death. He was determined to do everything possible to help Salem prosper. He and business partner Billy Shinn purchased and donated to the City of Salem the property that is today Kinney Blvd. He bought and invested in interstate property, owned the Salem Motel which is now the location of the I-57 overpass, and invested in twenty nine Texaco Gas stations until 1980 when they became Mobil Oil Co. He held membership in the Masonic Lodge in Harrisburg, the Salem Shrine Club, Salem Elks Club, and the Mt. Vernon AmVets. He was also a former member of the Salem Country Club, the Salem Moose Lodge, the Salem Lions Club and served as a Salem Police Commissioner for 27 years. He was of the Christian faith and attended Salem Lutheran Church. He married Jean Davis, August 9, 1951 in Cypress, IL and she preceded him in death January 29, 2006. Surviving are his daughter, Kimberlee Reynolds and husband Roger, and Kellee Bolton both of Salem, along with grandchildren Capt. Aaron Bolton and wife Dr. Rayla Bolton of Salem, IL stationed in England, Ashley Bolton of Salem, Ty and Madison Reynolds of Salem. Also bonus grandchildren, Nicholas Reynolds and friend Abby Wilson of Salem, Morgan Reynolds and fiancée Charlie Pennington of Salem, and great grandson, Kasen Harris of Salem. Also left to mourn his passing is a special niece Gayla Gaston and husband Jim and nephew Mike Davis, both of of Salem, IL, Brenda (Bill) Rendleman of Mt. Vernon, IL, Linda (Mel) Bickel of Collinsville, IL and Cindy (Steve) Brady of Arkansas, and a cousin, Raymond (Alice) Warfield of Crystal Lake, IL along with many great and great great nieces and nephews, and his special care-giver, Polly Tolliver of Salem. In addition to his wife and parents, he was preceded in death by his sister, Ollie Belle Ridley, November 21, 2020. Jimmie was cremated at his request, The family invites you to gather with them for a time of visitation on Friday from 5:00 p.m. until 7:00 pm at the Sutherland - Rankin Funeral Home, 310 N. Broadway, P.O. Box 97, Salem, IL 62881, with a memorial services beginning at 7:00 pm, officiated by Trent Ice. Burial with full military honors by the Salem American Legion Post #128 will take place at a later date in East Lawn Cemetery. It is important for those attending to wear a mask, and respect social distancing in accordance with the CDC and State of Illinois Phase 4 Revitalization guidelines. The family suggest memorials in Jimmie's honor be made to the Shriners Hospital for Children and will be accepted by the Sutherland - Rankin Funeral Home, entrusted with the family's care. On-line condolences may be made at sutherlandfuneralhome.com.

Jimmie A. Warfield, 94, of Salem, Illinois passed away Tuesday, March 16, 2021 at Twin Willow Nursing home in Salem with his daughter by his side. Born February 24, 1927 in Carrier Mills, IL, he was the son of John and Dimple (Rains) Warfield. A... View Obituary & Service Information

The family of Jimmie A. Warfield created this Life Tributes page to make it easy to share your memories.

Jimmie A. Warfield, 94, of Salem, Illinois passed away Tuesday,...

Send flowers to the Warfield family.