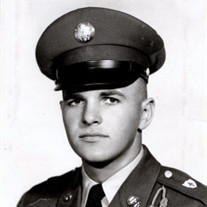 Jerry L. Crundwell, 80, of Odin, Illinois passed away October 13, 2020 in rural Odin. Born February 10, 1940 in Highland, Indiana, he was the son of Paul E. and Dorothy O. (Bryant) Crundwell who preceded him in death. Jerry was a truck driver working at rock quarries near Dixon, IL. He was a veteran of the U. S. Army, honorably discharged August 31, 1964. After he retired, he enjoyed playing golf, was a member of the Senior Golf League at the Colonial Golf Course, Sandoval. His family and friends will forever remember his dry sense of humor, mixed with a quick wit, full of jokes, with his family often being the brunt of the joke. He was married to Barbara Timmons December 7, 1962 in Somerville, NJ. Surviving is his son, Gregory L. (Jennifer) Crundwell of Salem, IL, their children Jaret and Drew Crundwell of Salem, a step-son Scott Bauer of Centralia, IL, and step-daughter Pam Sharp of Indiana. Also, his sisters, Marilyn Brown of Odin, IL and Pat Miller of Salem, IL along with several nieces and nephews. In addition to his parents, he is preceded in death by his brother William Crundwell, and brothers-in-law, Don Brown and Marion Miller. The family invite you to gather with them for a graveside service celebrating Jerry's life at 1:00 p.m. Saturday at the Iuka Cemetery, Iuka, Illinois. Military Honors will be accorded at the graveside by the Salem American Legion Post #128. It is important due to the recent health situation, social distancing and responsibility be observed. There will be no public visitation. Memorials may be made to the Donor's choice and will be accepted by the Sutherland - Rankin Funeral Home at that time, 310 N. Broadway, P.O. Box 97, Salem, Illinois 672881, (618) 548-1234, entrusted with the family's care. On line condolences may be left at sutherlandfuneralhome.com.

Jerry L. Crundwell, 80, of Odin, Illinois passed away October 13, 2020 in rural Odin. Born February 10, 1940 in Highland, Indiana, he was the son of Paul E. and Dorothy O. (Bryant) Crundwell who preceded him in death. Jerry was a truck... View Obituary & Service Information

The family of Mr. Jerry Lee Crundwell created this Life Tributes page to make it easy to share your memories.

Send flowers to the Crundwell family.